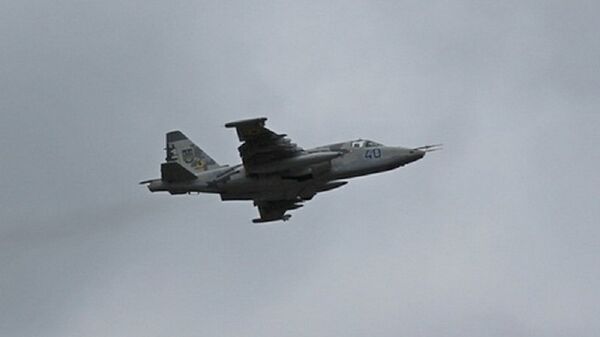 © Ministry of Defence of Ukraine
Subscribe
International
India
Africa
An Ukrainian combat jet was detected in close approach to the Malaysian passenger plane shortly before it crashed in eastern Ukraine killing all 298 people on board, the Russian military said Monday.

MOSCOW, July 21 (RIA Novosti) - An Ukrainian combat jet was detected in close approach to the Malaysian passenger plane shortly before it crashed in eastern Ukraine killing all 298 people on board, the Russian military said Monday.

“An altitude gain was detected for a Ukrainian combat jet, supposedly a Su-25, flying at a distance of 3-5 kilometers [1.8-3.1 miles] from the Boeing,” Lt. Gen. Andrei Kartapolov, the head of the Main Operations Directorate of the HQ of Russia’s military forces, told a media conference in Moscow.

The presence of the Ukrainian combat jet can be confirmed by video shots made by the Rostov monitoring center, Kartopolov stated.

The Su-25 (NATO reporting name Frogfoot) ground attack aircraft can hit a target at a distance of five kilometers (3.1 miles) as it’s equipped with air-to-air missiles, the head of the Main Operations Directorate said.

“We would like Kiev to explain why a combat jet was flying almost at the same altitude and the same time with a passenger plane along the route dedicated for civilian air traffic,” the general underlined.

Malaysia Airlines' Flight MH17 en route from Amsterdam to Kuala Lumpur crashed on July 17 near Donetsk in eastern Ukraine. All 298 passengers on board the airliner died, including 283 passengers and 15 crew members.

Ukrainian government and militia have been trading blame for the alleged downing of the airliner ever since reports suggested foul play, with independence supporters saying they have no required technology to shoot a target at altitude of 10 kilometers (6.2 miles).

Commenting on the crash, Russian President Vladimir Putin said it was vital to abstain from hasty conclusions on the case before the international investigation was over.