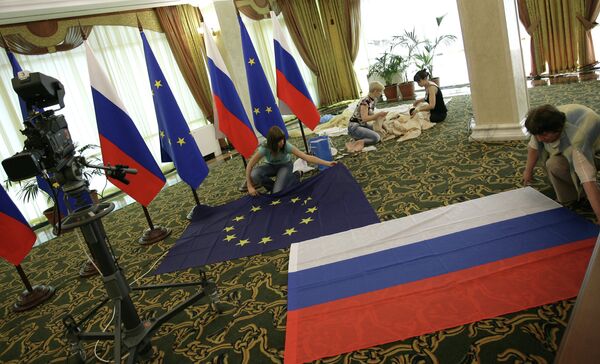 EU member states cannot reach a unified decision on further sanctions against Russia, despite of the fact that a number of countries have been putting pressure on Moscow after last week’s Malaysia Airlines plane crash in eastern Ukraine.

MOSCOW, July 21 (RIA Novosti) - EU member states cannot reach a unified decision on further sanctions against Russia, despite of the fact that a number of countries have been putting pressure on Moscow after last week’s Malaysia Airlines plane crash in eastern Ukraine.

Last week, Washington imposed a new round of sanctions against Moscow as a response to Crimea’s reunification with Russia, following a referendum held in March. The first round was implemented by the United States and the European Union immediately after the referendum.

Following the Malaysia Airlines Boeing 777 crash, Washington has been pushing the EU to implement further sanctions against Moscow. However, the 28-nation bloc is not yet ready to do so.

European countries, such as Germany and Italy, have strong relations and trade links with Russia. Thus, slapping Moscow with further sanctions could trigger a boomerang effect and harm their domestic markets.

Indeed, it is highly unlikely that Europe will impose more serious financial sanctions, an unnamed European diplomat, cited by the Financial Times, said.

“It might have an impact on speed but not yet on substance," the diplomat was quoted as saying by The Financial Times.

EU foreign ministers will meet up in Brussels on July 22 to discuss the possible implementation of broader sanctions against Moscow.

Except for the sanctions against Russian officials, EU foreign ministers during the July 22 meeting may discuss sanctions against businesses and legal entities, including the Russian Defense industry and the developer of the Buk surface-to-air missile system.

The governments of Ukrainian and some European countries blamed independence supporters in southeast of Ukraine for downing of the airliner on June 17. However, the leaders of local militia argued they did not have weapons capable of shooting down a target flying at an attitude of 10 kilometers.

Russia’s Defense Ministry said that at the time of the crash, the Ukrainian Army had at least 27 Buk missile launchers stationed in the Donetsk Region, capable of bringing down high-flying planes.

During the EU Summit last week, Germany and France spoke out against an embargo on arms and technology sales to Russia.

According to an unnamed French diplomat, France wants to keep sanctions at a second level, which means imposing sanctions only against particular individuals. This is due to a contract signed in June 2011 for two Mistral-class helicopter carriers to be built for Russia. In June 2014, French authorities confirmed France would meet its obligations under the contract worth $1.6 billion.

AFP obtained a copy of a draft UN Security Council resolution, circulated by Australia on Sunday. The document “calls on all states and actors in the region to cooperate full in relation to the international investigation of the incident, including with respect to immediate access to the crash site”

President Vladimir Putin said the new sanctions required a careful look but warned that they could bring the US-Russian ties to a dead end.