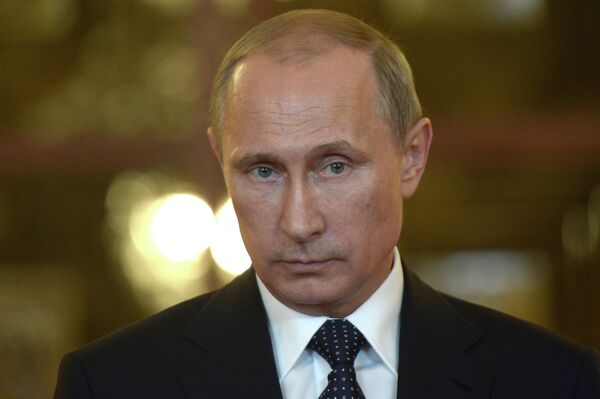 Russian President Vladimir Putin said no one should use the July 17 Boeing crash in Ukraine for their own political goals.

NOVO-OGARYOVO (Moscow Region), July 21 (RIA Novosti) – Russian President Vladimir Putin said no one should use the July 17 Boeing crash in Ukraine for their own political goals.

“Speaking about the terrible tragic events that occurred in the sky above Donetsk, I would like to say once again how we in Russia treat these events that today happen in Ukraine. We have repeatedly called on all the conflicting sides to immediately stop bloodshed and sit down at the negotiating table,” Putin told Rossiya 24 TV Channel.

“I can say for sure that if military actions in eastern Ukraine had not resumed on June 28, this tragedy would have not occurred. At the same time, no one should and has the right to use this tragedy to achieve their own political goals. Such events should unite people and not separate,” he said.

The Russian leader said people responsible for the situation in the region need to increase their own responsibility before their own people and people of the countries where the victims of the tragedy come from.

“On its part, Russia is doing everything possible so that the conflict in eastern Ukraine passes from today’s military phase to the phase of discussions at the negotiating table through peaceful and diplomatic means,” the president said.

Putin also called for the investigation into the Malaysia Airlines Boeing 777 plane crash in Ukraine to be carried out under the auspices of the International Civil Aviation Organization (ICAO).

“Everything should be done to ensure the secure work of international experts at the site of tragedy,” Putin said adding that currently representatives of Donbas and Donetsk, as well as Ukraine’s emergencies officials and Malaysian experts are working at the scene.

“It is essential that a full-fledged group of experts under the auspices of ICAO, related international commission work at the site of catastrophe,” Putin said.

“Everything should be done to ensure its full and absolute security, and necessary humanitarian corridors should be provided for its work,” he stressed.

Independence supporters plan to transfer the flight data recorders to experts from the International Civil Aviation Organization (ICAO) and refuse to give them to Kiev fearing that results of the investigation may be falsified.

The Malaysia Airlines plane en route from Amsterdam to Kuala Lumpur crashed on July 17 near the town of Torez in Ukraine’s Donetsk Region, killing 298 people.

Most of the people aboard the flight were Dutch, but there were also victims from many other nations, including Malaysia, Australia, Indonesia, the United Kingdom, Germany, Belgium and Philippines.

Kiev has accused independence supporters of downing the Malaysian airliner. Self-defense militia members insist that they have no required technology to shoot a target flying this high.