Train with 198 Bodies of Boeing Crash Victims Leaves for Donetsk 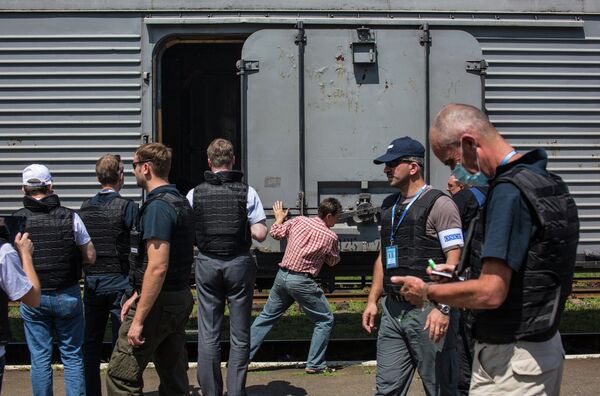 According to our correspondent, the train’s first destination is the town of Illovaisk, in the Donetsk region, from whence it will go to the region’s capital Donetsk.

There are a total of 198 bodies on the train, according to monitors from the Organization for Security and Cooperation (OSCE) in Europe who inspected the train ahead of the departure. Militia forces were guarding the train.

The head of the self-proclaimed Donetsk People’s Republic committee on refugees told RIA Novosti earlier that DPR authorities had offered to hand the remains of the crash victims over to Ukraine, but added Kiev has not given its answer yet.

The Malaysia Airlines plane with 298 people on board, including 85 children and 15 crew members, came down Thursday near the town of Torez in Ukraine’s Donetsk region.

Ukrainian government and militia have been trading blame for the alleged downing of the airliner since reports suggested foul play, with independence supporters claiming they have no missiles capable of shooting down a high-flying plane.