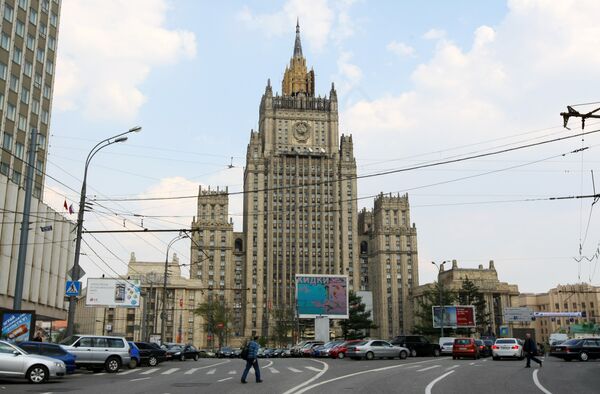 © RIA Novosti . Ruslan Krivobok
/
Go to the photo bank
Subscribe
Russian Foreign Ministry said Saturday it was baffled by several countries imposing pressure on investigators by voicing their theories about the causes of the Malaysia Airlines Boeing-777 crash in eastern Ukraine.

MOSCOW, July 19 (RIA Novosti) — Russian Foreign Ministry said Saturday it was baffled by several countries imposing pressure on investigators by voicing their theories about the causes of the Malaysia Airlines Boeing-777 crash in eastern Ukraine.

"It is baffling that even before the start of the investigation, official representatives of a range of countries rushed to groundlessly announce their theories on the causes of the accident, thus putting pressure on the investigation process. The Russian side addresses both sides of the Ukrainian conflict with an urgent call to do everything possible for the access of international experts to the area of the plane crash to carry out all the actions necessary to investigate the mentioned air crash," the ministry said in a statement.

The ministry underlined that Russia was the first to call for an independent and transparent investigation into the cause of the crash, with an international format that would allow avoiding unilateral evaluations.

"It [the investigation] must be international and conducted with the decisive participation of ICAO [International Civil Aviation Organization], and other international institutions, including the Interstate Aviation Committee (IAC), which involves Russian and Ukrainian representatives along with others," said in the statement.

A Malaysia Airlines Boeing 777 flying from Amsterdam to Kuala Lumpur crashed near the town of Torez in the Donetsk Region on Thursday, killing all the 283 passengers and 15 crew members on board.

US President Barack Obama said Friday there was evidence confirming that the plane was shot down by a missile fired from an area controlled by anti-Kiev militia.

Earlier the same day, US Ambassador to the United Nations Samantha Power said that the Malaysia Airlines Flight MH17 was «likely downed by a surface-to-air missile operated from a separatist-held location in eastern Ukraine."

On Friday, Australian Prime Minister Tony Abbott said that Russia would bear a heavy share of responsibility for the loss of 28 Australians on board the plane, if it was proved that the aircraft had been "brought down by a Russian-supplied surface-to-air missile."

Kiev also blamed independence supporters in the turbulent Donetsk Region for downing the passenger plane with a surface-to-air missile. The leader of the Donetsk People’s Republic, however, said local militia did not have the required technologies to shoot as high as 10,000 meters (33,000 feet) in the air.

Russia’s President Vladimir Putin said Friday that Kiev should take responsibility for tragedy and that “the circumstances around the aircraft disaster need to be investigated carefully and objectively.”

Ukraine and Malaysia Airlines are already investigating the accident at the site, with the help of the Organization for Security and Cooperation in Europe (OSCE), which ensures international presence.