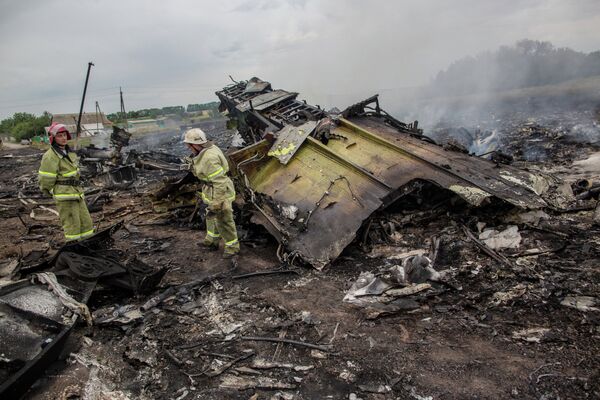 © RIA Novosti . Andrei Stenin
/
Go to the photo bank
Subscribe
A Malaysian passenger plane was in the Ukrainian zone of flight safety control when it crashed in eastern Ukraine on Thursday killing all 295 people on board, Russia’s Federal Air Transport Agency (Rosaviatsiya) said.

A Malaysian passenger plane was in the Ukrainian zone of flight safety control when it crashed in eastern Ukraine on Thursday killing all 295 people on board, Russia’s Federal Air Transport Agency (Rosaviatsiya) said.

“The plane has not contacted Russian air traffic controllers in Rostov,” Rosaviatsiya head Alexander Neradko said in an interview with Rossiya-24 television.

“The responsibility [for flight safety] falls on the Ukrainian side,” Neradko said.

“Based on the information currently available it is believed that the airspace that the aircraft was traversing was not subject to restrictions,” the IATA air traffic authority said Thursday in a brief statement published on its website.

It also extended “our deepest sympathies to the families and friends of the passengers and crew of MH17.”

This statement runs counter to the announcement of the Ukrainian air traffic authority Ukraerorukh released in early July that the air space over the areas where the government’s “anti-terror” operation is underway was closed over security concerns.

“To guarantee a proper level of air traffic security, the air space over the territory where the ATO [anti-terror operation] is underway has been closed for flights of civil aircraft in the interest of the state aviation,” the message of the Ukraerorukh said.

A Malaysia Airlines Boeing-777 flying from Amsterdam to Kuala Lumpur crashed near the city of Donetsk on Thursday. There were at least 280 passengers and 15 crew members on board.

Flight controllers reported that the plane disappeared from radar screens while flying at an altitude of about 10,000 meters (some 33,000 feet).

000000
Newsfeed
0
New firstOld first
loader
LIVE
Заголовок открываемого материала
Access to the chat has been blocked for violating the rules . You will be able to participate again through:∞. If you do not agree with the blocking, please use the feedback form
The discussion is closed. You can participate in the discussion within 24 hours after the publication of the article.
To participate in the discussion
log in or register
loader
Chats
Заголовок открываемого материала
Worldwide
InternationalEnglishEnglishMundoEspañolSpanish
Europe
DeutschlandDeutschGermanFranceFrançaisFrenchΕλλάδαΕλληνικάGreekItaliaItalianoItalianČeská republikaČeštinaCzechPolskaPolskiPolishСрбиjаСрпскиSerbianLatvijaLatviešuLatvianLietuvaLietuviųLithuanianMoldovaMoldoveneascăMoldavianБеларусьБеларускiBelarusian
Transcaucasia
ԱրմենիաՀայերենArmenianАҧсныАҧсышәалаAbkhazХуссар ИрыстонИронауОssetianსაქართველოქართულიGeorgianAzərbaycanАzərbaycancaAzerbaijani
Middle East
Sputnik عربيArabicArabicTürkiyeTürkçeTurkishSputnik ایرانPersianPersianSputnik افغانستانDariDari
Central Asia
ҚазақстанҚазақ тіліKazakhКыргызстанКыргызчаKyrgyzOʻzbekistonЎзбекчаUzbekТоҷикистонТоҷикӣTajik
East & Southeast Asia
Việt NamTiếng ViệtVietnamese日本日本語Japanese俄罗斯卫星通讯社中文（简体）Chinese (simplified)俄罗斯卫星通讯社中文（繁体）Chinese (traditional)
South America
BrasilPortuguêsPortuguese
NewsfeedBreaking
12:02 GMTRussian Presidential Spokesman Says Gazprom Fulfilling All Obligations
11:54 GMTLabour Leader Says it’s ‘Not Right’ to Say Only Women Have a Cervix
11:43 GMT'F**k Them': Carlson Responds to Yet Another Call to Fire Him Over 'Great Replacement' Theory
11:42 GMT'Piece of Scum': UK Labour Deputy Leader Lashes Out at Tories
11:14 GMTUK Transport Minister Calls on Britons to Behave Normally, Says There is No Shortage of Fuel
11:12 GMTHamas Has No Place in Sudan But Will It Give Up on Former 'Base'?
11:05 GMTJapan Should Look Into Having Nuclear Submarines, Candidate for Ruling Party Head Says
11:05 GMTIsraeli Soldiers Shoot Down Nazi Flag Raised Near Outpost in West Bank - Photo, Video
10:52 GMTTaiwan Strait Situation 'Complex and Grim', Xi Jinping Says as He Calls for 'National Reunification'
10:46 GMTHillary Clinton Urges to Call Her 'Madam Chancellor', But Netizens Come Up With Other Names
10:39 GMTGerman Green Party Might Find Some 'Rare Lizards' to Stop Nord Stream 2, AfD Co-Chair Warns
10:35 GMTWorld War II Bomb Suspends Elections at Several Polling Stations in Wuppertal, Germany
09:47 GMTTunisian Lawmaker Says Ennahda Party's Rigidity Led to Mass Resignation of Members
09:41 GMTCanary Island Volcano Continues to Erupt, Forcing More People to Evacuate
09:41 GMTChina Sells Almost $65Mln Worth of Carbon Dioxide Emission Quotas, Environment Ministry Says
09:28 GMTIRGC Commander Says 'US Hand-Made Armies' Failed to Tackle Terrorists in Afghanistan, Iraq
09:21 GMTKate’s 'Coolness' and William’s 'Bullying' Led to Rift With Harry and Meghan, Book Claims
08:21 GMTIndia’s Main Opposition Party Takes a Dig at Grand Celebration on PM Modi’s Return From US
08:11 GMTPolling Places Open for Parliamentary Elections in Germany
08:00 GMTEximbank Will Support Russian Exports to Croatia