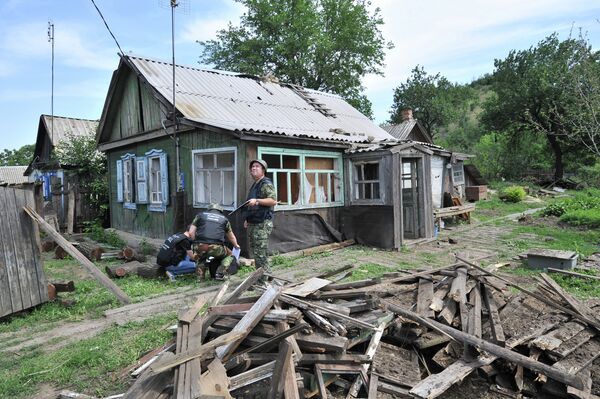 © RIA Novosti . Sergei Pivovarov
/
Go to the mediabank
Subscribe
International
India
Africa
The Russian Defense Ministry on Tuesday invited military attaches from 18 countries, including from the US and Germany, to assess the situation on the Russian-Ukrainian border that has been hit multiple times by Ukrainian artillery.

MOSCOW, July 15 (RIA Novosti) – The Russian Defense Ministry on Tuesday invited military attaches from 18 countries, including from the US and Germany, to assess the situation on the Russian-Ukrainian border that has been hit multiple times by Ukrainian artillery.

Deputy Russian Defense Minister Anatoly Antonov stressed that Ukraine “cynically denies indubitable facts and is doing everything to reject accusations of the shelling of the Russian territory.”

“The Ministry of Defense of the Russian Federation has registered a growth in the number of shelling directed at populated areas in Russia near the [Ukrainian] border fired from Ukrainian territory,” the deputy defense minister said.

“In line with this, we have invited the attaches of 18 countries accredited in Moscow to visit the region on July 15, 2014,” he said.

On Sunday, at least seven mortars were fired from Ukrainian territory into Russia, leaving one man dead and two women injured, one of them seriously.

Antonov specified that military attaches from the US, Germany, France, the Netherlands, Belgium, Ukraine, China, Japan and others were notified of the invitation.

“We consider the upcoming event as another goodwill gesture of the Russian side confirming our view toward openness with regards to military activity and another attempt to convey to the international community the real state of affairs surrounding the Russian-Ukrainian border,” Antonov said.

Roland Bless, a spokesman from the OSCE, told RIA Novosti earlier that a decision on sending the observers will be taken if consensus is reached among the 57 OSCE member states.

The Russian Foreign Ministry said in a statement on Monday it had invited OSCE monitors to Russia’s Gukovo and Donetsk crossing points on the Russia-Ukraine border as a goodwill gesture, without waiting for a ceasefire to be established.