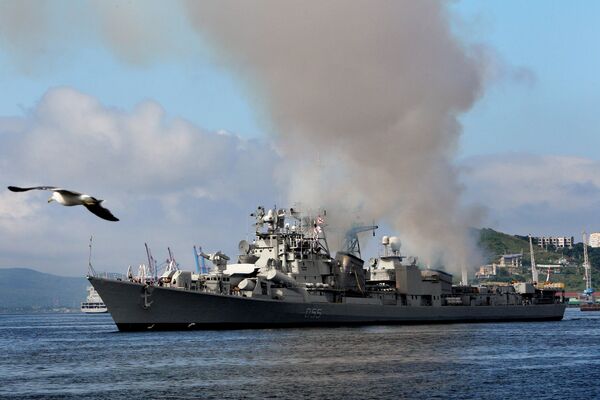 A ceremony for the beginning of the Russian-Indian naval exercise Indra-2014 was held Tuesday in Vladivostok, a spokesman for Russia’s Eastern Military District has said.

VLADIVOSTOK/NEW DELHI, July 15 (RIA Novosti) – A ceremony for the beginning of the Russian-Indian naval exercise Indra-2014 was held Tuesday in Vladivostok, a spokesman for Russia’s Eastern Military District has said.

An Indian Navy task force consisting of the INS Ranvijay destroyer, the INS Shivalik frigate and INS Shakti fleet tanker arrived in the port of Vladivostok in Russia’s Far East on Monday to take part in the joint exercise with the Russian Pacific Fleet.

The six-day exercise is aimed at training and improving joint naval actions, strengthening mutual trust and deepening cooperation between the two countries' armed forces, and boosting their capabilities to jointly cope with maritime security threats.

“At 3 p.m. local time [04:00 GMT] an opening ceremony for the exercises was held on board of the [Russian] guided-missile cruiser Varyag,” Martov said, adding that the event was attended by Rear Admiral Andrei Ryabukhin, deputy commander of the Russian Pacific Fleet and Rear Admiral Atul Kumar Jain, commander of the Indian Eastern Fleet.

Indian Navy officials were welcomed by the representatives of the Russian Pacific Fleet Command, diplomatic corps of India and the honor guard and orchestra of the Pacific Fleet Headquarters on the 33rd pier of the Vladivostok ship quay, Captain D.K. Sharma, a spokesperson for the Indian Navy, told RIA Novosti.

The Pacific Fleet is represented by the Varyag guided-missile cruiser, the Admiral Vinogradov destroyer, the Peresvet and several auxiliary ships. Both sides will use extensively naval aircraft and helicopters.

On July 14-17, the leadership of the two navies will undertake planning and training for joint operations.

The active phase of the exercise will take place on July 17-19 in the Peter the Great Gulf in the Sea of Japan. During the exercise, the ships will hold tactical maneuvering drills, artillery and missile firing drills, as well as helicopter deck-landing drills.

The exercise will end on July 19 with a debriefing aboard the Varyag, the flagship of the Pacific Fleet.

After the exercises with the Russian Navy, the Indian warships will proceed to the Pacific Ocean where they will hold the multilateral Malabar exercise with the US and Japanese Navy.

Since 2003, India and Russia have conducted seven large exercises under the so-called Indra series of joint ground and naval drills. In 2005, the joint naval exercises were code-named Indra, a portmanteau of the participants' respective countries. In 2011, Russia canceled joint naval drills with India in the Pacific Ocean, citing the tsunami and subsequent nuclear crisis in Japan.