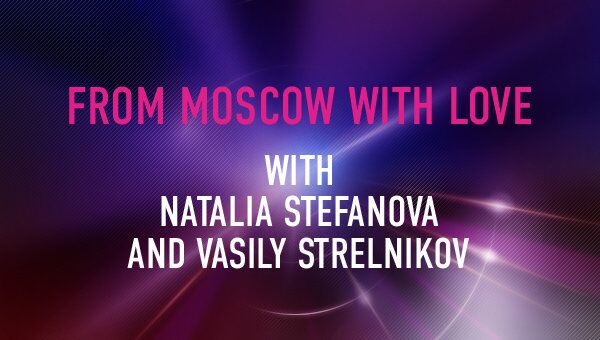 © Сollage by RIA Novosti
Subscribe
International
India
Africa
This week, Vasily is losing sleep over things that shouldn’t worry the typical Russian. The Internet, dual citizenship and his pay parking permit. Meanwhile, Natasha is getting ready for another trip to London, which means having to go through the entire process of visa application.

In Voice of Russia's weekly entertaining show From Moscow With Love with its unrivaled hosts Vasily Strelnikov and Natalia Stefanova will tell you about the most interesting events in Moscow, Russia and the World. This week, Vasily is losing sleep over things that shouldn’t worry the typical Russian. The Internet, dual citizenship and his pay parking permit. To cool off, he visits one of the tallest buildings in Russia – the Imperia skyscraper and shares his impressions. There’s also an account of the Soviet Space Shuttle – Buran being moved from Gorky Park to a new location. Meanwhile, Natasha is getting ready for another trip to London, which means having to go through the entire process of visa application at the British Embassy in Moscow.

Vasily: This is FMWL on the VOR. Here’s some news that might interest fans of the Soviet/Russian space program… The exact replica of the Soviet built Buran space shuttle was moved to its final resting place last weekend. It will now stand at Moscow's outdoor exhibition center – The VDNKh. The 50-ton vehicle was taken from Gorky Park, in what the city authorities described as an "unprecedented transportation operation." It took the whole night to move the 36-meter-long Buran it to it’s new home along Moscow streets.

Natalia: I’m confused. Is that the one that flew in the 80’s?

Vasily: No, I believe it’s a replica that was used for training purposes and later became a star attraction at Gorky Park. Even I visited it a few years ago, but can’t say I was impressed. All it was - just a miniature movie theater with a 3D screen and some cheap hydraulics to impersonate space flight. But the real Buran was a masterpiece of Soviet Space technology knowhow. A central difference was the Buran's capability of automatic landing, demonstrated during its 205-minute maiden flight on Nov. 15, 1988. The U.S. space shuttle had to be landed manually. The Buran also utilized a multipurpose Energia launcher, used arguably better thermal protection, had a bigger maximum payload and could stay in orbit twice as long as the US spacecraft. However, the Buran never made it to space again after its maiden flight. The program, was way too expensive for the cash strapped USSR of the late 80’s The program was officially scrapped in 1993.

Natalia: So, where, then, is the ship that flew?

Vasily: This is the sad part, Natasha. In 2002, the Buran that went into orbit was destroyed by a collapsed roof inside storage facility at the Baikonur Cosmodrome. Several prototypes were scrapped or sold abroad. It’s also sad, because there is no way to revive the program as much of the technology has been lost and its developers have largely died off. Can you imagine, Natasha, around a million people were involved in the Buran project in the Soviet Union. I read somewhere that a replacement ship was in the works all the way back in 2000. It was called the Clipper, but it was scrapped. Another, unnamed reusable spacecraft is now in development, but little progress if any has been reported so far.

Natalia: Vas, tell me about your trip to the 58th floor of the Imperia sky- scraper in Moscow.

Vasily: Yes, I finally made it up there. A while back I went up the Ostankino TV tower and told you all about it on this show, but last weekend I made it atop of one of Moscow’s tallest buildings. Imperia Tower is a 60-floor building complex that includes offices, a business center, a hotel and private apartments. The observation deck is kind of strange. First of all, you can’t go outside like you can a top of the Empire State Building in New York. Second, even though it’s an enclosed area, with glass walls, only half of it is available for tourists. Thus, you can only see the East, North and West parts of Moscow. The viewing room looks like it was completed in haste – there are no proper ceilings, the walls are concrete and steel and apart from a couple of bean bags, there is no furniture up there, no chairs, sofas, tables… One telescope – that’s it. But all that pales in comparison to the view itself. We were so lucky the day was sunny with hardly a cloud. As the building is very close to the center of town, the panorama is far more interesting than the one from the Ostankino tower, located in the far north of the city. Did I say “interesting”? No, it’s breathtaking. Looking out across the city, you realize what an amazing place this is, so much history here… There’s The Academy of Sciences, MSU University, Christ the Savior Cathedral, the White House Government Building, the Ostankino Tower just to mention a few of the sights.

Natalia: Let’s take a quick look at Moscow’s history. Moscow is a pretty old city – built in 1147 by Prince Yuri Dolgoruky. In 1328 Moscow became the capital city of the Great Moscow Principality and of all Russian Lands.

Moscow's Princes bought many others Principalities, and those princes who didn't want to sell theirs were killed - the way politics was usually made that time and is often made now. Moscow’s history is the history of turmoil and frequent foreign invasions. In 1382 it was burnt down by Genghis Khan’s descendant Khan Tokhtamysh. In 1612 it was occupied by the Poles. In 1812 Napoleon’s army entered and marauded the city. And every time Moscow was liberated by its people and rebuilt anew. This explains the city’s eclectic and controversial architecture. In 1941 Hitler tried to invade Moscow twice –in October and in December, but he failed both times due to the staunch resistance of the Red Army and the terrible frost that winter, which proved to be a blessing in disguise. It was near Moscow that Hitler suffered his first serious defeat and the tide of the war began to turn.

After the war the city grew and expanded. The highlight of the post war Stalin’s architecture were the SEVEN SISTERS - seven skyscrapers in Moscow, which remain among the tallest buildings in Europe. Muscovites call them Vysotki or Stalinskie VYSOTKI, "Stalin's high-rises". They were built between 1947 to 1953, in an elaborate combination of Stalin’s Empire style and Gothic style, and the technology used in building American skyscrapers.

The seven are: Hotel Ukraina, Kotelnicheskaya Embankment Apartments, the Kudrinskaya Square Building, Hotel Leningradskaya, which has been turned into Hilton hotel (where Stephen Graves always stays during his trips to Moscow), the Ministry of Foreign Affairs, the main building of Moscow State University and the Red Gates Administrative Building., which used to house the Soviet Ministry of Transport construction.

When tourists come to Moscow the first thing they are shown is naturally the Kremlin and Red Square. They never miss the Bolshoi theater and the GUM stores, but there are quite a few cultural and historical sites in Moscow, which are usually closed to the public, though they are landmarks of our history. Among them are the first electric power plant in Moscow and the Sklifosovsky First Aid Research Institute.Both are located in the center of the city and are a must for every tourist. I bet Vasily saw them from the Imperia Skyscraper.

Vasily: I did, just like many other fascinating sights. The tour itself is very simple. There’s a tour guide – a middle-aged woman with some very interesting facts about the building and the city’s history. I was surprised at the lack of any kind of brutal security presence. At Ostankino, you have to go through all sorts of security checkpoints, you get screened, x-rayed… here they don’t even ask you for an ID. Call in advance; reserve a tour for a particular hour. Drive over, park in the underground garage. Pay 600 roubles or about $15 for a ticket, get on board the amazingly fast elevator, and travel at 7 meters per second to the top. I highly recommend this to anyone visiting our great city.