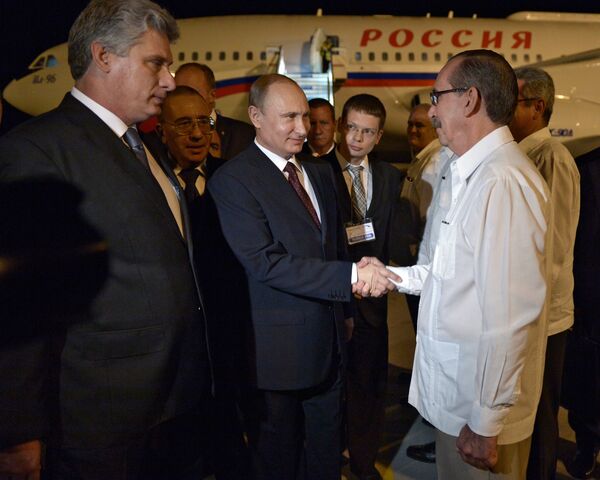 Russian President Vladimir Putin has arrived in Cuba for an official visit that will last less than 24 hours.

HAVANA, July 11 (RIA Novosti) – Russian President Vladimir Putin has arrived in Cuba for an official visit that will last less than 24 hours.

Putin’s main points on his agenda on the Caribbean island will be a meeting with Cuban revolution leader Fidel Castro, as well as with the current Cuban leader Raul Castro.

A wide range of documents are expected to be signed during Putin’s visit.

Earlier on Friday, Putin signed a law writing off 90 percent of Cuba’s $35-billion debt to the USSR, the Kremlin's press service announced.

Russia will write off 90 percent of that debt and the remaining 10 percent ($3.5 billion) will be paid over the next 10 years in equal installments every six months. Cuba’s first installment is scheduled for October 25, 2014, and the final payment will be made April 25, 2024.

The funds are to be transferred to Russian state development bank Vnesheconombank’s (VEB) account at the National Bank of Cuba. The savings from the write-off are to be used to help finance the economy of the Caribbean island nation, which is under an economic embargo by the United States.

President Putin pointed to the mutual easing of the visa regime between Russia and the countries of South America as a practical step towards greater multilateral interaction.

The president is to have official visits to Argentina and Brazil later this month, the Kremlin press service reported. The visits are timed to coincide with Putin’s participation in the BRICS summit of the group of five major emerging economies comprising Brazil, Russia, India, China and South Africa.