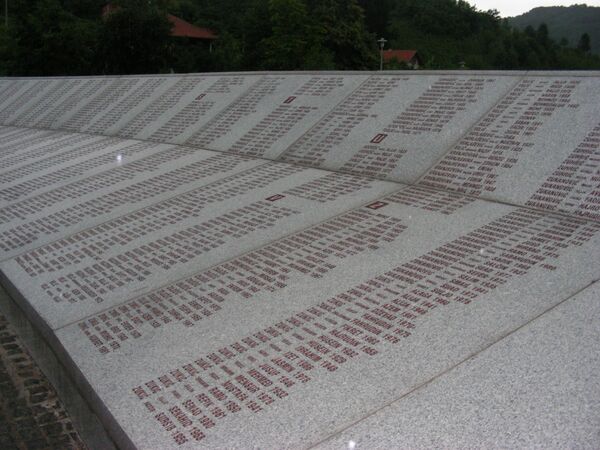 © Photo : Юлия Петровская
Subscribe
John Robles spoke to Stephen Karganovic on the history of Srebrenica in this special interview on the nineteenth anniversary of those events.

On July 11, 1995, two NATO warplanes bombed Serbian forces, advancing on Srebrenica. But due to the bad weather and the fact that Serbian forces were holding French and Dutch prisoners of war, NATO called off what was to be a massive bombing campaign. Late in the afternoon, Serbian general Mladic and other commanders entered into Srebrenica. They had won, for the moment. This loss by NATO could not accept and through indirect manipulation and false representation of the facts, US and NATO slandered the Serbs and successfully changed the presentation of a legal military operation. Radio Voice of Russia spoke to Stephen Karganovic on the history of Srebrenica in this special interview on the nineteenth anniversary of those events.

John Robles: Hello sir, how are you this evening?

Stephen Karganovic: I am fine, thank you very much.

We have an anniversary of a very tragic event coming up on July, 11. Some might say it was a part of or the beginning of the rule of international lawlessness and wanton impunity by the architects of Yugoslavia’s and Serbia’s destruction by the US and NATO. Why do you think that is important and give us some of the history, please?

Yes, it is definitely what you have just said and it has become the starting point for a process in international relations. I wouldn’t quite say in international law because, as you correctly put it, the process involves the breakdown of law, lawlessness in fact. What happened was that Srebrenica became a propaganda paradigm that was then used to justify military interventions under the guise of the “right to protect” and as a result it served as the rationale for a couple of very destructive military adventures: Kosovo in 1999, and Iraq, then Libya, and now in Syria, and who knows what is next, and the basic rationale for all these adventures was “We must prevent another Srebrenica”.

Well, the ironic thing is that the death toll in Srebrenica, if you take it at its highest, would be about 8,000. And as you and your listeners, probably, know, the death toll in each of these interventions was far more than that. If you are talking about Syria, you can add another zero to the Srebrenica 8,000 and you probably still would not come close to the carnage that occurred there over the last three years. I just might remind you that it was motivated in large part by the presumed need to “prevent another Srebrenica” as the forces of the current president there supposedly were slaughtering their own people. Much the same thing happened in Libya. According to some estimates, the death toll in Libya was 40,000 or 50,000, a bit more modest, and needless to say in Iraq it was enormous. The figure is still controversial, but nobody puts it at less than 100,000 and some estimates go as far as a million, and so on and so forth.

Oh yes, let’s not forget Kosovo. There the death toll was relatively modest but you have to calculate the impact of depleted uranium bombs that were dispersed all over the country and that over the next couple of thousand years will be killing every living thing there, and people are already massively dying of cancer. So you can imagine that too should be attributed to the “humanitarian intervention” that was conducted there.

So Srebrenica has huge geopolitical implications. I am not saying that there was an idea to turn it into that, but it was an opportunistic move. The potential for Srebrenica, once it took shape as a propaganda concept, to serve in that role as the rationale for future “humanitarian interventions” was seen and seized upon. So that would be part of the answer to your question.

The other part is what actually happened in Srebrenica: there is no doubt that what happened was a massacre. That is not controversial. What is controversial - how many people were killed and – even more important – the legal character of the crime that was committed. As you and your listeners are aware, by now whenever the word “Srebrenica” is mentioned we are all indoctrinated to associate it with genocide. That is precisely the way it works, and in its geopolitical application that I mentioned earlier that is the key point. Whenever they get ready to bomb a country and take it over for its resources they say “Well, we have to prevent the genocide that is being perpetrated by the local rulers, so we have to remove them and install a group of people that would be friendly to us and willing to obey our orders”. And – of course – deliver the goods that we covet in that particular country.

So genocide is a very important point when you are talking about Srebrenica and it so happens that, the judgments of the Hague Tribunal takes place, notwithstanding, no evidence was produced for genocide after about half a dozen or more Srebrenica trials. So what we can say with a fair degree of certainty is that after a bitter inter-communal war in that part of Bosnia that lasted for about three years the Serbs took over Srebrenica, and some of them took the law into their own hands, so to speak, and decided to take revenge for all the people on their side that, previous to that, were murdered in raids that were conducted by the units of the Bosnian Muslim army that were operating from Srebrenica. That doesn’t justify a single murder, but it explains it in a far better way than the idea of genocide. There was no intention of exterminating Bosnian Muslims. The most that happened there was that neighbors were very angry at other neighbors and they decided to let them have it for what they had been doing to them over the previous three years. In three or four days they killed, we estimate, up to a thousand Muslim prisoners, which is without the slightest justification, but certainly it was not genocide and there is no forensic or any other type of evidence to support the figure of 8,000 executed prisoners that you hear about all the time.

What was the actual number, then?

We can only go by the forensic investigations that were conducted by experts of the Hague Tribunal, of the Prosecution, between 1996, beginning right after the massacre that occurred in 1995, and their exhumations of mass graves that went on until 2001. In that period they uncovered the physical remains of about 1,920 individuals. However, we then looked at the pattern of injury. That is very important because at the same time that this massacre of prisoners was going on another significant event was occurring as well. The division of the Bosnian Muslim army that was in Srebrenica was conducting a military breakout from Srebrenica to Muslim-held territory in Tuzla, which is about 60 kilometers away. Along their way they had many clashes with Serbian forces, which used guns and other implements of war, as they were entitled to do, against the military column. As a result of these clashes, thousands of Muslim soldiers and the civilians who were with them were killed, and I just want to make the point that when you have a mixed military-civilian column, the opposing army is entitled to shoot at it. That is not a war crime, it is a legitimate military operation, so everyone that was killed in the breakout of the Muslim army unit was a legitimate casualty, which sounds very bad, I know, in human terms, and it is, but in international law terms that is the way it is. What they have been doing, in effect, was to exhume the graves where the casualties from the fighting were buried and then they would use them to reinforce the numbers of those who were really executed, in order to boost the figure, essentially. So that’s what has been going on.

Thank you very much for that detailed answer. Now, would you characterize Srebrenica. Not by itself, but the entire situation surrounding it, as a blueprint for what we are seeing now in multiple countries, in particular in Ukraine?

Well, it is different and yet there are striking similarities.

But the thinking behind it. Unless it is just to destroy as many people as possible.

I think that destroying people is something that occurs naturally when you undertake such a brutal operation which aims only at achieving a certain political effect and doesn’t ask about the human cost. So yes, people will be killed, Muslims, Christians, whatever they may happen to be, and that is a huge tragedy. But to return to your original question as I understood it, Srebrenica in Bosnia has become a huge stumbling block to the reconciliation and peaceful coexistence of the ethnic and religious communities, mainly the Serbs and the Muslims. Croats are not a part of that because there were not any to speak of in that area during the war. So, by creating this narrative that Srebrenica signifies genocide of Muslims by Serbs, you can see how that makes it very difficult for the two communities to come together on any issue, and that is perfectly natural. How could you just calmly sit and have coffee with someone who has committed genocide on your family?

So that makes it very important to clarify what happened, not to minimize the crime – call it by its right name, put it in the proper perspective, and make sure that all sides are aware that they committed crimes in that particular area. Each community committed crimes against the other community and people should be punished as individuals for the crimes that they committed in both communities. And we should not try to impose on one community the burden of a particularly heinous crime just for political effect. And the political effect is pretty obvious: as long as they cannot get together on anything, you need a foreign arbitrator to keep them in check. So, Srebrenica is an example of how the classical “divide and rule” technique operates and in this particular case as long as Muslims hang on to the genocidal narrative they are never going to come to the same table with their Serbian neighbors and plan either a common future, or a civilized divorce, or whatever, although they can still be good neighbors, they can still cooperate and be on good terms even if they live in separate states instead of in a common Bosnian state. That is a completely separate issue. However, as long you have this burden of genocide that is not likely to happen. But what is very likely is that foreign tutelage, and foreign arbitration, and foreign interference in the internal interference and lives of these people is going to go on for a very, very long time and that is a tragedy because they need to seize control of their own destiny and to be masters in their own house.

Is there any realistic way that we can stop all this meddling? We are seeing it in the Ukraine all over again.

Of course, taking into account the local peculiarities, which they always do, that is roughly the scenario that is taking place in the Ukraine. In Ukraine you don’t have two completely different religions, not that Islam and Christianity are so completely different, in Ukraine you have varieties of the Christian religion. But people have been indoctrinated to exaggerate the differences and to downplay the similarities. As long as you brainwash them in those terms you can always use them as political pawns for your purposes.