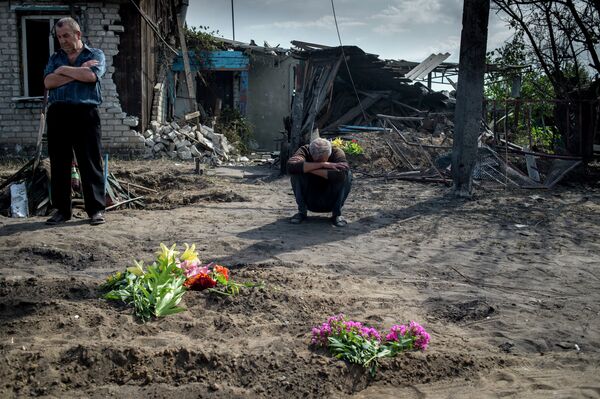 The Russian Foreign Ministry called on Kiev Friday to stop attacking civilian targets and residential districts and to refrain from trying to resolve problems solely by force.

“We again call on the Ukrainian authorities to stop attacks on civilian targets and residential districts and, ultimately, to start thinking about saving the lives of ordinary people,” the ministry said in a statement.

“Kiev’s ongoing attempts to solve problems solely through forceful methods, through putting forward ultimatums and announcing more and more demands are against the July 2 Berlin declaration by foreign ministers of Germany, Russia, Ukraine and France and will cause only bloodshed and more casualties,” the statement reads.

The ministry said the Ukrainian authorities have intensified their rhetoric and started employing more violent methods in the eastern regions after its leaders contacted top US and UK officials, who have “de-facto supported Kiev’s actions.”

On Tuesday, soon after Ukrainian President Petro Poroshenko called off the ten-day ceasefire in the country’s east, the Ukrainian National Guard resumed the active phase of the military operation launched by the authorities in Kiev back in mid-April to suppress the independence movement.

The authorities of the self-proclaimed Donetsk People’s Republic have said they are willing to continue consultations with the Ukrainian authorities to defuse the crisis in the country. Kiev has also said it is ready for talks, with the participation of the contact group involving Ukraine, Russia and the Organization for Security and Cooperation in Europe (OSCE).

About 160 civilians have been killed in the Kiev government’s special operation in eastern Ukraine since April, the Donetsk Region administration’s top health official said Wednesday. After his inauguration, President Poroshenko announced the country’s intention to establish a humanitarian corridor to evacuate civilians from the combat zone in the country’s southeast, but he has not keep his promise, according to local defense forces.