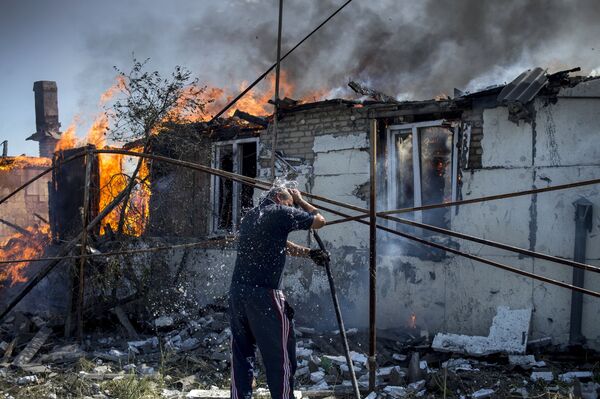 At least two residents of Luhansk have been killed and eight others injured after the Ukrainian Army shelled a residential area of the city, local authorities reported Friday.

KIEV, July 4 (RIA Novosti) – At least two residents of Luhansk have been killed and eight others injured after the Ukrainian Army shelled a residential area of the city, local authorities reported Friday.

Pro-Kiev forces shelled residential buildings on Thursday, according to the statement. The injured people were hospitalized. A local oncology center and a school were also damaged by the fire but no casualties have been reported yet.

Approximately 5,000 residents have been left without electricity, as the shelling destroyed an electricity substation in the city.

Ukraine’s army is still bombarding the eastern city of Slaviansk in Donetsk Region, according to the headquarters of local defense forces.

“Mykolaivka [town], Mykolaivka thermal power station and Semenivka [a suburb of Slaviansk] have been under constant shelling. At night Slaviansk was repeatedly shelled by howitzers. They are pressuring us with a continuous stream of armored vehicles and shells,” said the commander of Slaviansk defense forces, Ihor Strelkov, according to his representative.

Mykolaivka is a strategic settlement, as it is located on a route connecting Slaviansk with other territories controlled by anti-Kiev forces.

“Our supplies have been completely cut off,” the militia leader added.

The neighboring city of Kramatorsk was also bombarded, according to witnesses.

The shelling of Kramatorsk has destroyed the building of the last working local newspaper, “Technopolis.”

“Luckily, there are no victims,” the newspaper said, adding that because of the power outage, no one was at the building at the time of the strike. The newspaper said it will not be able to print its material for some time.

Gunfire was also heard in the villages of Piski and Karlivka near the eastern city of Donetsk, Mayor Oleksandr Lukyanchenko said on his website.

"According to residents, sounds of explosions were heard in many areas of Donetsk during the night of 3-4 July. However, military action and heavy artillery shelling took place not in the city, but outside of it, near the village Piski and the village Karlivka," the Donetsk mayor said.

On Tuesday, soon after Ukrainian President Petro Poroshenko called off the ten-day ceasefire in the country’s east, the Ukrainian National Guard resumed the active phase of the military operation launched by the authorities in Kiev back in mid-April to suppress the independence movement.

The authorities of the self-proclaimed Donetsk People’s Republic have said they are willing to continue consultations with the Ukrainian authorities to defuse the crisis in the country. Kiev has also said it is ready for talks, with the participation of the contact group involving Ukraine, Russia and the Organization for Security and Cooperation in Europe (OSCE).

According to a joint statement issued Wednesday by the foreign ministers of Russia, Germany, France and Ukraine, the contact group on Ukrainian reconciliation should convene no later than July 5.