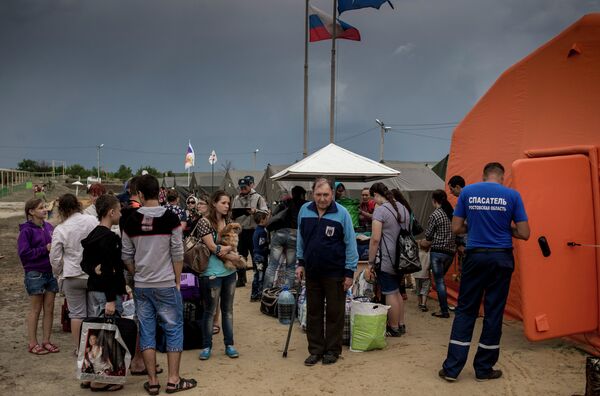 © RIA Novosti . Valeriy Melnikov
/
Go to the photo bank
Subscribe
The number of people who have left Ukraine since the western-backed coup is now approaching half a million. John Robles interviewed Oksana Sazonova, a humanitarian worker helping refugees in Rostov.

Hello! This is John Robles, I'm speaking with Oksana Sazonova, she is a coordinator with the volunteer movement Peaceful Skies and a journalist working with the refugees from the Donetsk and the Lugansk People’s Republics.

Robles: Hello Oksana, how are you this morning?

Robles: I'm really interested to hear about the situation with the refugees coming out of Ukraine. And I think it is very important for a Western audience to hear witness reports, like from yourself, as to what is really happening there. Can you give us some of the details about what the situation is like for people right now in Lugansk, in Slavyansk and in Donbas in general?

Sazonova: Yes, now, the situation with the refugees staying here in the Rostov region is rather quiet, because from the border is practically closed and people can’t see even come here if they want, because of the fights near the border, yesterday and this night. But about a week or maybe two or three weeks ago, we were getting about 10,000 or 15,000 people every day, managing.

Most of them are women with babies, with little children, and they just come here in Russia and they have nowhere to go. They just cross the border and they stay in… our tent camps here, and to wait here for our officials to come and to take them somewhere else.

Robles: I see. Now you say the border is now closed. I just want to make this very clear; the border is closed by the Ukrainian side, right?

Sazonova: It depends on the customs. Somewhere by the Ukrainians, somewhere by Russians, because of the fights near the border, but if some people somehow come, because it is very hard to, they can let them go to Russia.

Sazonova: Yes, they can, but there are very few people because of these fights.

Robles: I see. There were the reports that we had about 450,000 people, at least, refugees from Ukraine. Can you verify those numbers?

Sazonova: These are the official numbers. I didn’t count people at the customs, but I believe that these are real numbers because we were very busy. And I remember these days, when we had such a stream from Ukraine, I had hundreds of calls every day, they were calling me from the border at any time. And now it is very hard to find accommodation for them here in the Rostov Region. We had hundreds of houses, free flats, which people could give them.

Robles: So, ten to fifteen thousand people a day. For how long did that go on?

Sazonova: For about two or three weeks.

Robles: That’s a lot of people! You’ve mentioned that it is mostly women and children. The junta in Kiev, they are trying to say they are fighting an anti-terrorist operation. Just the fact that women and children are fleeing in terror for their lives tells me that that is a false claim. Are these people really under threat, these women and children?

Sazonova: I should say that some full families also tried to flee from Ukraine, but the Ukrainian army doesn’t let the men go, because they have the military operation and the men should serve in the army. So, they tried to leave Ukraine. For example, he has several children or his wife is pregnant, how can she go alone?

Robles: The women and children are really in danger for their lives, right?

Sazonova: Of course! And there can be shooting and even bombing even at the customs and even on the Russian territory. As you know, there were some bombs falling even here in Russia.

Robles: Our western listeners, they are trapped in the western media bubble. They don’t hear any of this. Can you tell us about the attacks on the border points? And your idea why doesn’t the Ukraine junta want these people to leave the country?

Sazonova: There were several attempts of bombing here, at the customs here in the Rostov Region. I personally know a young woman who has three children and she tried to flee to Rostov and she under shooting in Ukraine, in her native city and after that even at the customs.

After that the director of a camp at the border came to take his family in Rostov, and he took her also, because there was shooting even in the Russian territory. I personally saw the customs which were bombed, at the Russian side. There are two of them, in Gukovo town and in Novoshakhtinsk.

Robles: There was no reason for the Ukrainian military to bomb the customs checkpoints, was there?

Sazonova: Of course! Maybe they want these customs points to be closed, maybe they want people to be scared and not to flee to Russia. From what people say, the Ukrainian army just tries to make people panic.

Even when they are shooting in the Donetsk and the Lugansk People’s Republics it is just for panic. There are not too much victims, it is not really for killing people. They just shoot at everything, just for people to hear the shooting, to hear these bombings, to be scared and not to flee to Russia…

Robles: So that they agree to live under the Bandera Junta. Because these people don’t want to live under a fascist illegal government, right?

There are really some cases when, we tent camps near the border and they live only there, they don’t go to Rostov or to other cities, and when there is no fighting, no bombing, they just go on foot to their hometown in Ukraine, do something there and come back to Russia.

Robles: Just for our listeners in case they look at the map. I’d like to get you opinion on the so-called “international humanitarian organizations” who keep denying the fact that there is a humanitarian catastrophe going on right there. You are working with these people, you see it, you’ve seen what was happening, what is your reaction and what would you say to those Western organizations that claim to be humanitarian?

Sazonova: I really think that now we: young people from Russia, volunteers, do the job of these international organizations. We do everything for these people. We give them accommodation, we give them food and everything they need. And when these people come and what they say about what is happening in their native cities…I used to live in the Ukraine, I know these cities and I just can’t believe that such things can happen there. It is like the Middle East or something like that. And people come, for example a family with children and see a bus that was bombed and bloodied, or maybe they see people with guns on the street or for example, my granny works at a lyceum…

Robles: I’m sorry she worked where?

Sazonova: Like a University and several times these people with Kalashnikovs came to her.

Robles: I’d like to get into a very serious topic. I think even some Russians don’t really believe how bad it is in Lugansk and in Donetsk, and in Odessa etc, because I’ve had many people who have come from there and we are seeing journalists killed. People that are actually there have told me, and what you are telling me also verifies it, that it is even much worse than what the Russian media is giving us. So, can you tell us more specifics about how bad it really is down there?

Sazonova: You know, there are Russians who say that the Russian media wants to dramatize the situation. But what people say, it is even worse. For example…

Robles: I'm sorry, that’s exactly what I was talking about, because there are accusations that we are seeing… all this horrible stuff, but what I'm hearing is even worse than what we are seeing.

Sazonova: Yes. Just now I got a message from a family from Kramatorsk. They have a little child. And just before I got this message. They had bombing and it was at night but it was like day with fires and everything. I also have already told about a woman with three children who tried to flee and were under shooting (fire). With three little children without a man.

Robles: They were shot at?

Sazonova: She is alive, she was saved. And people who come, they say that they don’t know where they will have bombing next time or shooting. They hear it everywhere, they hear it in empty buildings, in empty regions of the cities. They can’t let their children walk alone, they don’t let children go to kindergartens because there can be some terrorist event.

Robles: Who are the terrorists in Ukraine? Is it the Right Sector and the Kolomoisky militias, and the Ukrainian so-called National Guard or is it the people in Donbas who are trying to defend their families and their homes and their land?

Sazonova: You can come to Rostov region and see these terrorists – mothers, children “separatists”.

About the real terrorists, I think that the biggest terrorist and separatist, especially separatist, is Kiev.

People who come here say: we didn’t want real independence before, we wanted to have an autonomic republic, like Crimean has before. But after they started this war against the people, they say: we don’t want to be in a country that wages war against us now.

Robles: At the beginning all they wanted was federalization and to recognize that: “Okay, you can speak Russian”, right? And the lunatic Nazis in Kiev said: “Okay, we are going to kill you.

Sazonova: Yes, it is something like that. And really, people in Donbas, before this war, before Maidan, before everything, they could speak Ukrainian.

Robles: Isn’t that understandable? I mean, I myself never really had any bad feelings towards Ukrainians. I did have some bad racist meetings with some Ukrainians back in the 90s, but I wouldn’t say that is the whole nation. But now, I feel kind of trepidation when I hear the word ‘Ukrainian’.

Sazonova: Yes. They didn’t like the western Ukrainian even before. I'm a Russian. If I come there with the Russian passport, it could have been dangerous for me even before this whole thing. I'm not saying that they will surely kill me, but, for example, they could refuse to serve me in a café or in a shop. Such things happened even before, and we didn’t like them, they didn’t like us.

Sazonova: To the Nazis I can only say one thing: they should remember how the Nazis finished in 1945.

And to the Americans and maybe some Europeans I want to say that if they can’t even find Ukraine on the map, I'm not sure that they really understand what Ukraine is.

Can they find Donetsk or Lugansk on the map? Can they find even Kiev on the map or Lvov? And can they understand what the term ‘the Ukrainian Russian’ means? This si the terms Ukrainians in Donbass used many many years ago.

And just one question that we volunteers ask: if Russia is the aggressor in the eastern Ukraine, why do they flee to Russia and not to Ukraine?

Sazonova: And we also really laughed at her (supposed) comment about Rostov Mountain. Really, it was great! Now we want to call our organization “Rostov Mountain”.

Sazonova: Thank you very much.

This is John Robles, you were listening to an interview with Oksana Sazonova. She is a coordinator with the volunteer movement Peaceful Skies, a journalist and a humanitarian worker in Russia. She is assisting the refugees coming out of Ukraine.