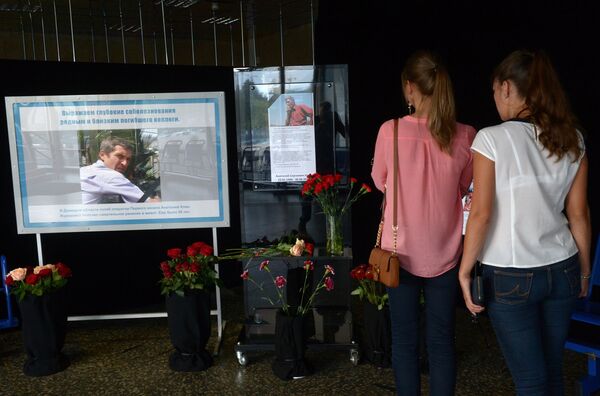 "Today, when we said farewell to Anatoly Klyan, a cameraman from Channel One who was killed by the Ukrainian military, everybody understands that Kolomoyskyi himself is behind this death as well. [Kolomoyskyi] will have to answer for [Klyan's] death and the deaths of other Russian journalists as well as residents of Odesa [Ukraine’s southern city] and Donbas [Ukraine’s eastern regions]," Markin told reporters.

Earlier in the day, the Basmanny district court of Moscow approved the Investigative Committee’s arrest warrant for Kolomoyskyi in absentia, bringing official charges against the energy tycoon believed to be behind the unlawful massacres in Ukraine.

“Kolomoyskyi has connections allowing him to hide in the EU. In light of the serious nature of the charges [against Kolomoyskyi], the court sees no possibility to issue a more lenient preventive punishment," the court ruled.

Moscow believes the Azov Battalion, a secretive paramilitary unit financed by Kolomoyskyi, played a key role in the violent attack on the Russian embassy in Kiev in mid-June, causing tensions between Moscow and Kiev to boil over.

This Wednesday, Moscow is paying its respects to Klyan, who came under gunfire late on June 29, with his colleagues from other channels. The a 68-year-old journalist sustained a wound to his stomach in an attack by Ukrainian Special Forces in the Donetsk Region and died as he was being rushed to the hospital.

Earlier in June, two employees of Russia’s state-run VGTRK media holding lost their lives in a mortar attack near the Ukrainian city of Luhansk.