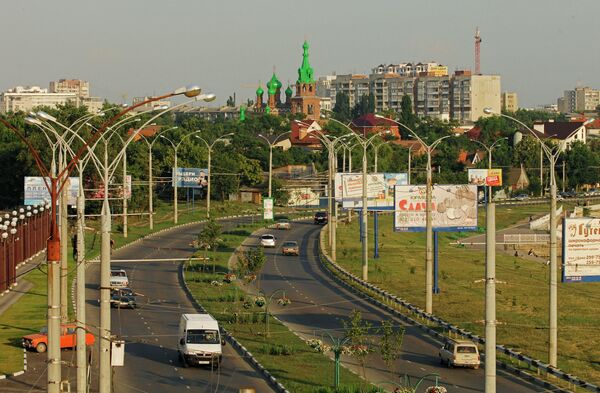 The mayor of Russia’s Krasnodar has invited Chinese companies to participate in the establishment of industrial enterprises in the city, a source in the regional administration said Wednesday.

KRASNODAR, July 2 (RIA Novosti) – The mayor of Russia’s Krasnodar has invited Chinese companies to participate in the establishment of industrial enterprises in the city, a source in the regional administration said Wednesday.

The Krasnodar delegation, headed by Mayor Vladimir Evlanov, is currently taking part in the first China-Russia Expo. The exposition, which kicked off in Harbin, the capital of northeast China's Heilongjiang Province, on June 30, is aimed at enhancing cooperation between the two countries.

Representatives of about 200 Russian companies from 20 Russian regions have arrived in Harbin to hold meetings and negotiations with business entities and China’s governors. The Krasnodar delegation has already conducted a series of negotiations, including with Harbin Mayor Song Xibin.

“At a meeting with the Harbin mayor we discussed the prospects of investment cooperation, in particular [we] touched upon questions concerning the creation of industrial enterprises funded by China in Krasnodar. Krasnodar has enough territory for such purposes. Our proposals have been welcomed by the Chinese side . First of all, these could be enterprises in the sphere of machine building, instrument making and the food industry,” the press service quoted Evlanov as saying.

The Krasnodar mayor is convinced the city “has plenty of opportunities to attract Chinese investment into the economy.”

The administration elaborated that Krasnodar and Harbin established their first ties in 2006, and two years later, the two cities signed an agreement on twinning.

Harbin is a city in Northeast China, with a population of about 3.5 million. Russian specialists that took part in the construction of a Trans-Manchurian Railway station back in 1898 are considered to be some of the founders of the city.

Krasnodar, with a population of about 850,000 people, is an administrative, business, industrial and cultural center of Krasnodar Region.