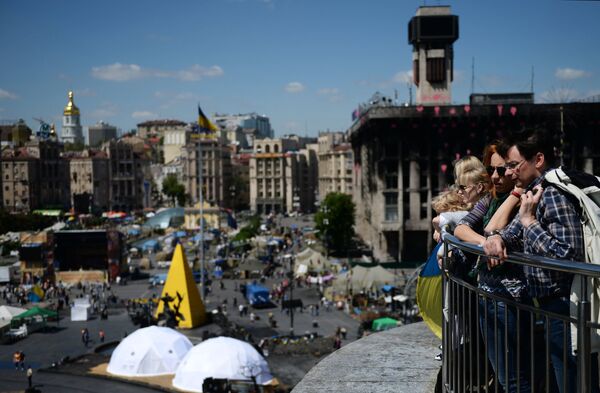 © RIA Novosti . Alexey Filippov
/
Go to the photo bank
Subscribe
One of the main political goals of the Ukrainian "Euro-Maidan" movement is the further expansion of NATO to the east, Russian Deputy Security Council Secretary Evgeny Lukyanov told RIA Novosti in an interview Wednesday.

MOSCOW, July 2 (RIA Novosti) - One of the main political goals of the Ukrainian "Euro-Maidan" movement is the further expansion of NATO to the east, Russian Deputy Security Council Secretary Evgeny Lukyanov told RIA Novosti in an interview Wednesday.

"It's quite apparent that this is one of the goals," Lukyanov said in reference to the West criticizing Russia for holding military exercises near the Ukrainian border.

"Why shouldn't we hold maneuvers or not check the military capabilities of our divisions when events in Ukraine with the intention, most likely, to exist in certain headquarters in the West that need NATO expansion to the East?" Lukyanov said.

Regardless of NATO's assertion that it will not expand eastward, the Baltics, located just 150 kilometers (90 miles) from St. Petersburg, Russia's second-largest city, are already NATO territory, Lukyanov added.

Talking to Russian ambassadors and permanent envoys on Tuesday, Russian President Vladimir Putin drew on the fact that Russia's Western partners have spent the past two decades trying to convince Moscow of their good intentions and readiness to jointly build a strategic partnership, when, in fact, they have expanded NATO and pushed the military-political space they control closer to Russian borders.

In mid-June, Russian Ambassador to NATO Alexander Grushko said the group's continuing expansion policy, which ignores equal and indivisible security, will inevitably lead to the emergence of new divisional lines in Europe.

The ambassador stressed that only by refusing to strengthen one's security at the expense of the security of others can the region attain the desirable balance.

Following the onset of the Ukrainian crisis, Grushko suggested the alliance "is trying to use the crisis in Ukraine to its utmost in order to prove its relevance in the current security environment."

Due to the ongoing political crisis in Ukraine, NATO introduced several measures explained by the need to ensure the security of its allies. Baltic Air Policing missions have intensified and additional NATO ships have been sent to the Baltic and the Mediterranean seas. NATO also declared an increase in permanent troop deployment, expansion of training programs, strengthening of early warning systems and improving the capacity of response forces.