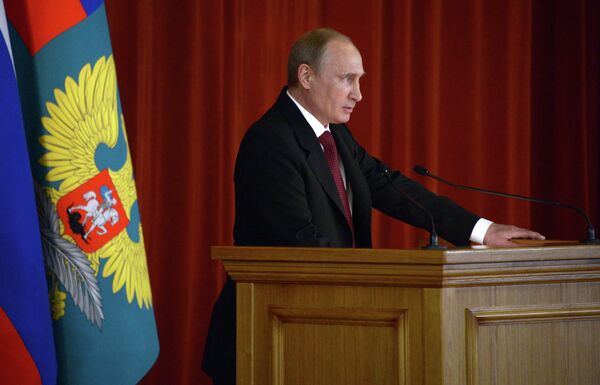 “There can hardly be doubts that the unipolar world model failed. Louder and louder, peoples and countries express their determination to choose their destiny on their own, to preserve their civilizational and cultural identity, which contradicts the West’s attempts to keep dominating in the military sphere, politics, finance and economy, ideology,” Putin said at a meeting with Russian ambassadors and permanent envoys.

Putin drew on the fact that Russia's Western partners have spent the past two decades trying to convince Moscow of their good intentions and readiness to jointly build a strategic partnership, when, in fact, they have expanded NATO and pushed the military-political space they control closer to Russian borders.

“Those who continue to claim their unique role actively dislike Russia’s independent policies. The events in Ukraine confirm that, and they also confirmed that the model of relations with Russia, full of double standards, is no longer operational,” the president concluded.

The Russian Foreign Ministry earlier criticized its Western partners for their one-sided position on the Ukrainian crisis, urging the US and EU to take into account the interests of all parties involved, including citizens of the southeastern regions of Ukraine, instead of blindly supporting every move the Kiev authorities make.

Moscow has repeatedly called for a new multipolar system of international relations, built on respect for mutual interests and effective work benefiting individual nations and the entire international community.