Events in Ukraine Provoked by West for Deterrence of Russia - Putin 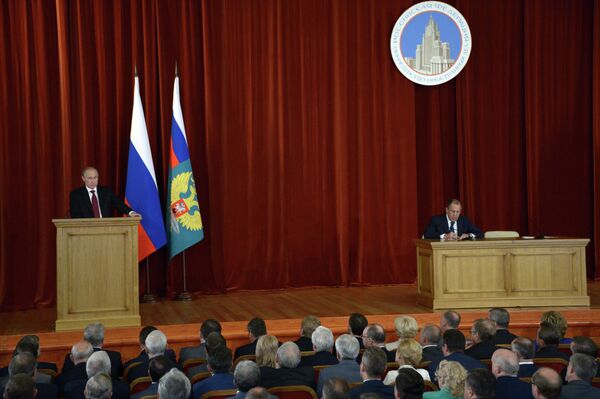 © RIA Novosti . Aleksey Nikolskyi
/
Go to the mediabank
Subscribe
International
India
Africa
The events in Ukraine provoked by the West are a concentrated political expression of deterrence toward Russia and an attempt to create a tense center on the Russian border, Russian President Vladimir Putin said Tuesday.

MOSCOW, July 1 (RIA Novosti) – The events in Ukraine provoked by the West are a concentrated political expression of deterrence toward Russia and an attempt to create a tense center on the Russian border, Russian President Vladimir Putin said Tuesday.

“We all need to clearly understand that the events provoked by the West in Ukraine have become a concentrated political expression of deterrence toward Russia. Its roots go deep in history and it’s obvious that this policy has not stopped even after the ‘Cold War,’” Putin said during a meeting with Russian ambassadors and permanent representatives.

“Attempts have been made through Ukraine to rock the situation in the region and to create a tense center on our borders,” Putin said.

The Russian leader expressed hope that eventually the West would drop its ambitions of building a “global barracks” and acknowledge the right of each country to develop the way they see fit.

“I hope, nonetheless, that pragmatism will prevail, the West will drop its ambitions of trying to build a ‘global barracks,’ placing everyone in formation, imposing single rules of behavior and social life and start building relations on the basis of equality, mutual respect, and mutual interests,” Putin stressed.

Since the very beginning of the Ukrainian conflict, the West has been blaming Russia for fomenting tensions in the country, though Moscow has repeatedly denied any involvement in the issue.

Relations between Russia and the West stalled after Crimea voted in March to rejoin Russia, which was interpreted by many world leaders not as an expression of the free will of Crimean residents, but as a violation of Ukraine’s territorial integrity.

Following the move, the United States and the European Union imposed sanctions against a number of Russian officials and companies. Moscow was also threatened with tougher restrictive measures that may target key sectors of the country’s economy.

Russia’s Foreign Ministry has labelled the measures counterproductive and warned of the boomerang effect they might have.