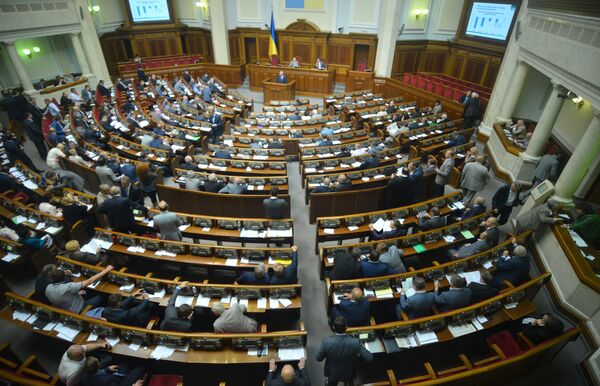 Following Poroshenko’s announcement that the ten-day ceasefire in the east was over, Ukrainian parliament Speaker Oleksandr Turchynov announced Tuesday that the active phase of the special operation had resumed.

“I hold in my hands the signatures of five party leaders except the Communists and Party of Regions [parties], which is not surprising because of three key issues: First, the issue of the European choice; second, the issue of necessary reforms; and, third, the issue of how fast peace can be reached in the east,” Sobolev said.

“We believe that the introduction of martial law in two regions, Donetsk and Luhansk, will allow us to introduce a situation in which the protection of civilians and military personnel, as well as the conduction of a quick anti-terrorist operation under martial law will be a just response to the terrorists who have not for a single day stopped these terrible things that have happened during this so-called unilateral peace [regime], where explosions on railroads were heard, when dozens of our compatriots were killed, and when hundreds of wounded were hospitalized,” Sobolev said, adding: “And this is why we call on the president to immediately submit an act [to parliament] on introducing martial law for consideration.”

The Ukrainian army conducted artillery attacks against the cities of Slaviansk and Kramatorsk, shelled the villages of Semenivka and Nikolayevka.

Battles are also taking place on the Russian-Ukrainian border in Luhansk Region, and the first injuries have already been reported.

Earlier in June, Ukraine’s factions called for the imposition of martial law in the Donetsk and Luhansk regions. At the time, Russia’s foreign minister said that the measure could give carte blanche to the authorities in Kiev to use any kind of force necessary to quash protesters in the east, and Russia’s UN envoy Vitaly Churkin stressed the move would only deepen the crisis, leading to even more violence.