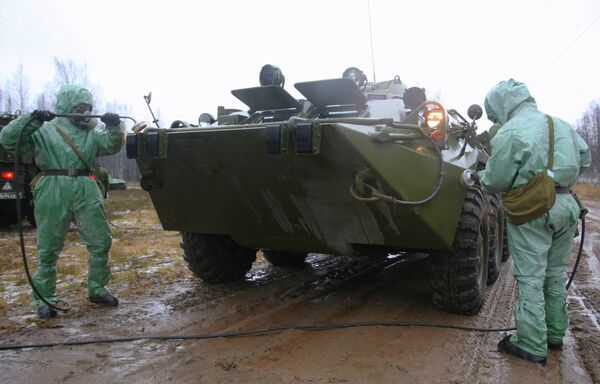 “A new unit within the structure of the Black Sea Fleet has been established and has started its designated duties of CBRN defense, which based on its potential, can fully meet the needs of military units and formations in Crimea in its current state,” Colonel Igor Gorbul said, adding that the unit is staffed with both draftees and contracted soldiers.

He explained that the newly created armed regiment has about 200 units of weaponry and military equipment, including modern CBRN reconnaissance vehicle based on the BTR-80 armored carrier.

“In August, the personnel of the unit will hold field exercise, which will be held at the Opuk training area (Republic of Crimea). During the training, the military staff will practice in conducting CBRN reconnaissance and in eliminating sources of conditional radiation contamination in unfamiliar terrain. Particular attention during the month-long training will be given to masking troops and facilities with aerosol,” Col. Gorbul said.

Crimea, previously an autonomous republic within Ukraine, refused to recognize the legitimacy of the coup-imposed government in Kiev that came to power following the February overthrow of President Viktor Yanukovych and voted to rejoin Russia in a referendum which saw over 96 percent of voters in the region back the motion.

Crimea is now going through an integration process, revolving around legislative adjustments, infrastructure projects, investment activity and other necessary arrangements, including rearmament and military upgrades. The top priority tasks of the initial stage were solved, including electricity, water and provision supplies to the peninsula as well as timely payments of salaries and retirement benefits to the residents.

The transition should be completed by January 1, 2015.