Russia Ready for New Anti-Terror Cooperation with US – Lavrov 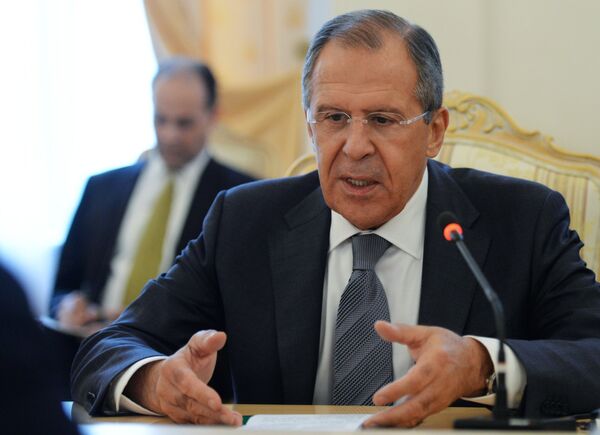 Russian Foreign Minister Sergei Lavrov said Friday Moscow is open to renewed anti-terrorism cooperation with the United States, but added the ball is now in the US’ court.

MOSCOW, June 27 (RIA Novosti) – Russian Foreign Minister Sergei Lavrov said Friday Moscow is open to renewed anti-terrorism cooperation with the United States, but added the ball is now in the US’ court.

“We had quite an effective bilateral mechanism with the Americans, which combined various departments that were employed in the fight against terrorism. Last year that mechanism was frozen by our American colleagues and now we clearly sense their interest…to renew close cooperation in anti-terrorism. We are ready for that, it’s up to [our] American colleagues,” Lavrov said.

The deadly Boston bombing attack in April 2013 highlighted the need for closer anti-terrorism cooperation between Moscow and Washington. A year later in early April, NATO foreign ministers announced their decision to suspend all contact with Russia following a split over the crisis in Ukraine.

Now it is feared the freeze may undo the nations’ anti-terror efforts in turbulent Middle Eastern countries such as Afghanistan.

“Because NATO decided to curtail cooperation with Russia, this will unfortunately directly impact the combat efficiency of the Afghan Army. Evidently, this is a shortsighted approach from NATO partners that will hurt themselves,” Russia’s Afghan ambassador Andrei Avetisyan told reporters earlier in the day.

A similar warning came earlier from NATO Secretary General Anders Fogh Rasmussen, who said he hoped the suspension would not affect Russia’s participation in joint international projects in Afghanistan, including training anti-drug officials in the country.

The planned withdrawal of US troops from Afghanistan by the year-end is feared might destabilize the Central Asian region, as it could allow the Taliban to act with impunity. The Pentagon plans to leave a residual force behind, along with three military bases, to maintain peace and security in Afghanistan.