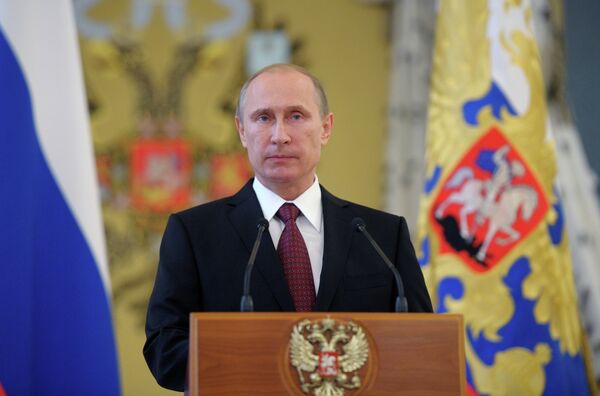 Russian President Vladimir Putin said Thursday it was his government’s priority to defend the nation against potential military threats, with the help of improved armed forces.

MOSCOW, June 26 (RIA Novosti) – Russian President Vladimir Putin said Thursday it was his government’s priority to defend the nation against potential military threats, with the help of improved armed forces.

“We are bringing [the military] to a whole new level to keep it on par with the requirements of the 21st century,” Putin said in a speech to military academy graduates in the Kremlin.

“It’s evident that only a mobile, highly effective army and fleet are capable of solving the strategic task of securing Russia’s safety, sovereignty and national interests. The main goal is to defend our citizens against potential military threats,” Putin said.

The Russian president vowed to continue surprise checks in the military, saying no unit, including peacekeeping forces, would be exempt from unannounced inspections.

Putin pointed out a sharp increase in military spending, which has resulted in higher basic pay and better social protection for army personnel.

“Military personnel are being provided with housing. Starting this year, accommodation is being distributed according to a plan, we are arranging mortgage subsidies and perfecting the accumulative mortgage system,” the president said.

On Monday, peacekeeping troops in central Russia were alerted to a spot check, which came as part of a comprehensive inspection of Central Military District forces ordered by President Putin.

The tests are to run from June 21 to June 28, with progress and completion reports provided daily. The combat readiness checks are to cover about 65,000 troops of all branches of the armed forces. The checks also involve over 180 aircraft, 60 helicopters and more than 5,500 units of weaponry and military equipment.