PACE President Hopes to Revive Ties with Russia Before Year-End 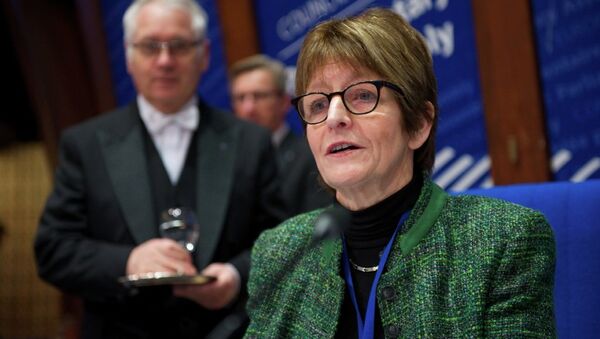 © PACE
Subscribe
Anne Brasseur, President of the Parliamentary Assembly of the Council of Europe (PACE), told RIA Novosti Thursday she hoped to find a way out of the current deadlock over the Russian delegation before January 2015.

STRASBOURG, June 26 (RIA Novosti) - Anne Brasseur, President of the Parliamentary Assembly of the Council of Europe (PACE), told RIA Novosti Thursday she hoped to find a way out of the current deadlock over the Russian delegation before January 2015.

Brasseur stressed the decision to strip Russian delegates of their voting rights in the assembly would be in effect until the end of the current session, which is to end next January. Their credentials may then be renewed.

“I hope we will be able to settle the conflict before then, because if we do, there won’t be any reason why we shouldn’t restore the delegation’s authority,” the PACE president said.

Brasseur emphasized she could not tell how the situation would evolve if Russia and the assembly failed to find any common ground on Ukraine, adding she did not know how the majority would vote.

“That’s exactly why I took such an effort to explain to Mr. [State Duma Speaker Sergei] Naryshkin and Mr. [State Duma’s Foreign Affairs Committee Head Alexei] Pushkov the importance of your presence at the commission’s meetings, to be able to keep in touch, explain the situation and your stance,” the PACE president said.

The PACE chief said it was “in Russia’s own interest to take part in our work.” Brasseur argued the Russian delegation would still be able to take the floor and participate in debates during PACE sessions – but not to vote on its decisions.

Earlier in June, Alexei Pushkov, who leads the Russian delegation at PACE sessions, said Russia had never completely severed its ties with the European Council’s advisory body and confirmed he had discussed “the possibility of a meeting in a European capital” with PACE’s Anne Brasseur and State Duma Speaker Sergei Naryshkin.

On June 3, Moscow officially informed PACE about its decision to halt bilateral cooperation and skip the summer session after the assembly moved to strip the Russian delegation of some of its voting rights in April over its alleged involvement in the situation in Crimea. During the vote on Russia’s suspension, its delegation walked out of the PACE spring session in protest.

Alexei Pushkov called the entire debate on Russia’s credentials a political farce and stated that Russia would not rush to reconsider its foreign policy and principles.