Kiev Must Be Held Responsible for Journalist Killings – Investigation Official 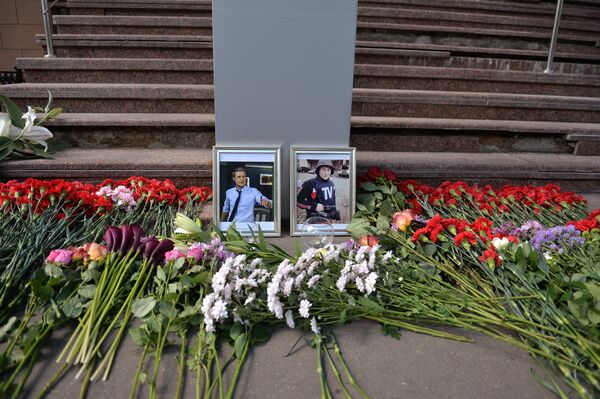 © RIA Novosti . Vladimir Pesnya
/
Go to the photo bank
Subscribe
The Ukrainian leadership shall eventually be brought to justice for the killing of a Russian TV journalist and a member of his crew, Russia’s Investigative Committee Spokesman Vladimir Markin said Thursday.

MOSCOW, June 26 (RIA Novosti) - The Ukrainian leadership shall eventually be brought to justice for the killing of a Russian TV journalist and a member of his crew, Russia’s Investigative Committee Spokesman Vladimir Markin said Thursday.

When asked whether the government in Kiev was going to put an end to journalist killings, Markin said “let’s ask Ukrainian leadership. I can’t tell what their thoughts or plans are, but the death of our people would be enough to impose strict liability on all those who made and carried out the orders. It will happen sooner or later.”

Earlier in June, two employees of Russia’s state-run VGTRK media holding lost their lives in a mortar attack near the Ukrainian city of Luhansk. Anton Voloshin, a sound engineer, was killed by a direct hit from a mortar round, while TV journalist Igor Kornelyuk was fatally wounded and died in a local hospital.

The prime minister of the self-proclaimed People’s Republic of Luhansk, Vasiliy Nikitin, blamed the journalist deaths on Ukraine’s National Guard. Viktor Denisov, a cameraman who was with the deceased during the attack, reported that both were wearing press badges.

Russia’s Foreign Ministry demanded immediate punishment for those responsible for the death of the reporters. Ukrainian President Petro Poroshenko last week ordered a thorough investigation into the lethal attack.

According to Reporters Without Borders, over 200 journalists have been injured or attacked in Ukraine since the start of the year.