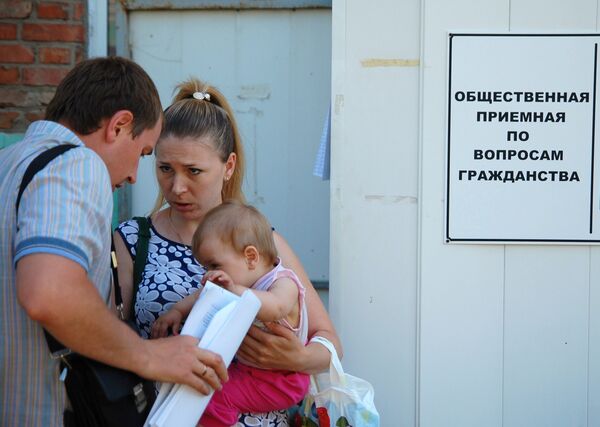 © RIA Novosti . Vladimir Kornev
/
Go to the photo bank
Subscribe
Over 9,600 Ukrainians have applied for asylum in Russia, the deputy head of the Federal Migration Service’s department in Moscow, Marina Kapustina, said Thursday.

Earlier, Russia’s migration service reported that some 8,500 people from Ukraine had applied for temporary asylum and refugee status in Russia. The refugees have been accommodated in 25 Russian regions, a source at inter-ministerial operational headquarters told RIA Novosti.

As of Thursday morning, the Russian authorities had set up 227 camps for temporary accommodation of refugees from Ukraine, currently providing assistance to 16,600 people, according to the Ministry of Emergency Situations.

Amid violent clashes between independence supporters and government-backed forces conducting a military operation in eastern Ukraine, many local citizens have chosen to leave their homes and seek shelter in neighboring Russia.

According to Russia’s Federal Migration Service, more than 400,000 Ukrainians are currently staying in the Russian regions bordering Ukraine, with Russia’s Rostov Region receiving the bulk of the flow of refugees.

On Wednesday, Russian President Vladimir Putin told the government to develop urgent measures to support Russian regions that have seen an inflow of refugees from violence-hit Ukraine.

Last week a delegation of the office of the UN High Commissioner for Refugees (UNHCR) arrived in Rostov Region to meet with local government officials and praised Russia’s contribution to accommodating refugees from Ukraine.