Russian Legislature Repeals Act on Use of Military Force in Ukraine 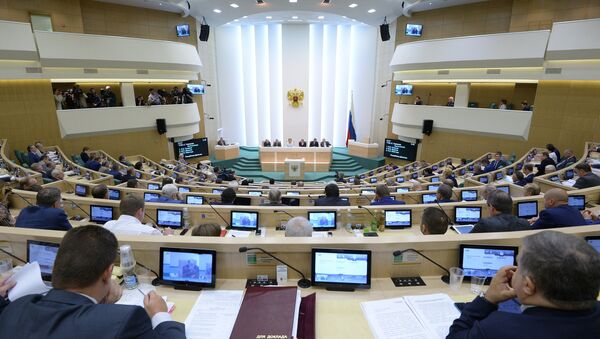 © Sputnik / Vladimir Fedorenko
/
Go to the mediabank
Subscribe
International
India
Africa
The upper chamber of Russian parliament revoked the resolution authorizing the use of military force in Ukraine on Wednesday upon the request of President Vladimir Putin.

MOSCOW, June 25 (RIA Novosti) – The upper chamber of Russian parliament revoked the resolution authorizing the use of military force in Ukraine on Wednesday upon the request of President Vladimir Putin.

The respective letter from President Putin asking to cancel the resolution reached the Federation Council on Tuesday evening, Putin’s press secretary, Dmitry Peskov, said, adding this was done “with the goal of normalizing and settling the situation in Ukraine’s eastern regions,” ahead of trilateral negotiations on resolving the conflict in Ukraine.

Earlier the same day, Russia's Deputy Foreign Minister Grigory Karasin expressed hope that the "positive signals that the president of the Russian Federation is sending" would be recognize by the international community and Kiev, paving the way for a genuine nationwide dialogue and a "mutually respectful search for solutions" to the crisis in Ukraine.

On June 20, after a two-month military conflict in the southeast of the country between Kiev-led troops and independence supporters, Ukrainian President Petro Poroshenko ordered security officials to lay down their arms until June 27. The week-long unilateral ceasefire is one of the initiatives in President Poroshenko's 15-step peace plan unveiled last week.