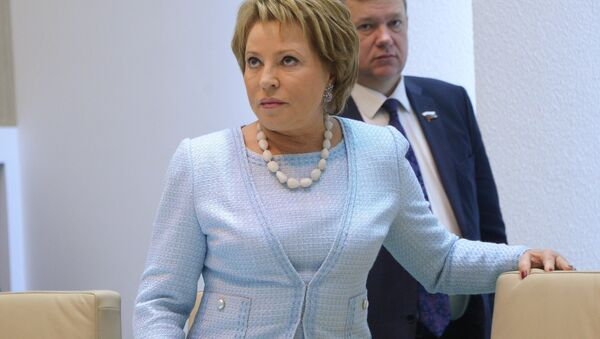 © Sputnik / Vladimir Fedorenko
/
Go to the photo bank
Subscribe
Russia intends to monitor the situation in Ukraine and will not stand on sidelines if violence in the country continues, the speaker of the upper house of Russian parliament, Federation Council, Valentina Matvienko said Wednesday.

MOSCOW, June 25 (RIA Novosti) – Russia intends to monitor the situation in Ukraine and will not stand on sidelines if violence in the country continues, the speaker of the upper house of Russian parliament, Federation Council, Valentina Matvienko said Wednesday.

“The situation in southeastern Ukraine remains tense. Naturally, Russia will continue to monitor the situation by all available means, including promoting a peaceful solution with the participation of our foreign partners. Naturally, we won’t stand aside,” Valentina Matvienko told journalists.

“If the rights of ethnic Russians, of Ukrainian citizens who are Russian speakers, are violated… if there are other types of human rights abuses, then we have enough forms, methods and instruments to defend our compatriots,” the speaker said, adding that Wednesday’s recall of an act authorizing the use of military force in Ukraine “does not mean that we will turn a blind eye to blatant violations of human rights.”

Matvienko echoed the statements made by Russian President Vladimir Putin after high-level talks with the Austrian president earlier on Tuesday.

The Russian leader stressed that Moscow would always protect ethnic Russians in Ukraine and the part of the Ukrainian population that feels inextricable ethnic, cultural and linguistic ties with Russia.

Russian Foreign Minister Sergei Lavrov earlier said military action in the east of Ukraine verged on ethnic cleansing, and expressed hope Ukrainian President Petro Poroshenko would do everything possible to avert similar scenarios in the future.

According to Matvienko, currently there is no need to deploy a peacekeeping contingent to the crisis-hit country. “In my opinion, there is no need to deploy any kind of peacekeeping contingent at present. It’s an internal political crisis, and Kiev and the southeast [of Ukraine] should find a mutually acceptable solution within the framework of negotiations,” the speaker said.

At the same time Matvienko stressed it is impossible to settle the crisis in Ukraine without Russia’s participation.

“Today it seems, it has already been confirmed, that in order to settle the situation in Ukraine without taking into perspective Russia’s interests or without Russia’s participation is impossible. Therefore I hope that a pragmatic approach, common sense in settling the issue, forming cooperation between the two neighboring states, between two brotherly peoples will prevail,” the federation council speaker said.

Earlier in the day, the upper chamber of Russian parliament revoked the authorization to use Russian military forces in Ukraine upon the request of President Putin. President Poroshenko said the move was the “first practical step” toward reconciliation in eastern Ukraine.