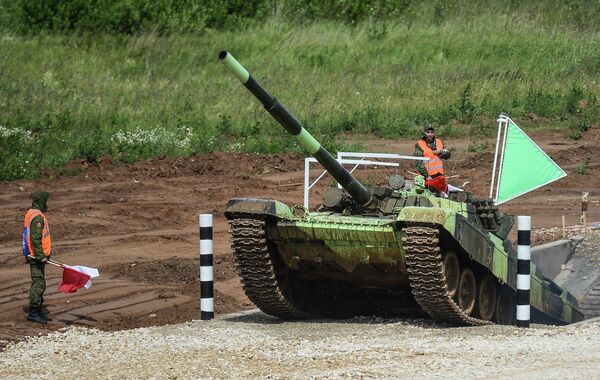 ALABINO, Moscow Region, June 23 (RIA Novosti) – As the Russian preliminaries for the Tank Biathlon 2014 international competition open outside Moscow, the Ukrainian team is not among the international participants, the competition organizers told the press Monday.

“Including Russia, the international stage [of the competition] will include 14 participants, with 13 foreign crews, and all of the teams competing in Russian-made tanks, except China. So far, according to my information, there has been no application from the crews of Ukraine,” Major-General Alexander Peryazev, Director of Army Training of the Russian Federation, said Monday.

The Russian preliminaries of the tank biathlon competition opened outside Moscow in Alabino on Monday. The Russian stage of the competition will run for one week, setting the stage for the International Tank Biathlon Competition, which will be held in Russia from July 26 to August 10.

The tank biathlon is similar to a regular biathlon and consists of three laps run around a twenty-kilometer route. Participants need to negotiate several obstacles, such as a slalom section, river shallows, a steep hill, a pontoon bridge and an escarpment. Tank teams fire at targets imitating tanks and low-flying helicopters at distances of 900-2,200 meters.