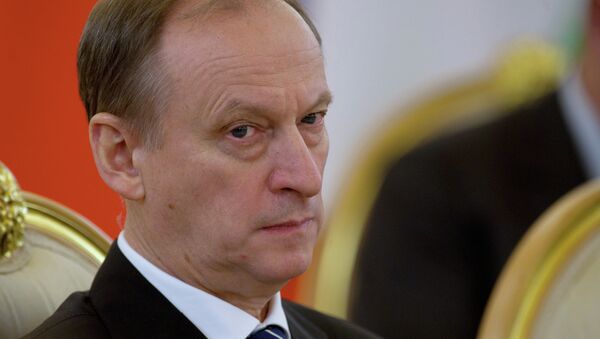 “After the withdrawal of American troops they have failed to form a unified government. Now the state has de facto split into three parts: the Sunni one, the Shiite one and the Kurdish one,” Patrushev said.

“Bandits have opened prisons and let hundreds of inmates out, including those jailed for terrorist activities. Data is coming in that suggests terrorists are now trying to increase the area of their influence in Iraq,” the Russian official stressed.

Patrushev indicated the divide started in 2003 when US Secretary of State Colin Powell showed a model test tube of anthrax at a UN assembly meeting in an effort to show Iraq had biological weapons.

“Later it became clear that Washington had no proof. But Iraq had already been targeted with mortar attacks followed by Hussein’s execution. And there were plenty of other examples: Yugoslavia, Libya, Egypt, Syria, and now Ukraine – these are all links in a chain. The Americans continue to find ‘legal pretext’ for violence against sovereign states. First they eliminate the head of state and then enforce so-called ‘democracy’,” Patrushev explained.

Hundreds have died in Iraq since the start of an Islamist military offensive earlier this month.  Insurgents from the Islamic State in Iraq and the Levant (ISIS) seized control over large swaths of land in Iraq and seized the major cities of Mosul and Tikrit, claiming they intended to launch an offensive on the country’s capital of Baghdad. Facing heavy fighting, Iraqi troops fled the area. Many soldiers have been taken hostage or executed by the insurgents.