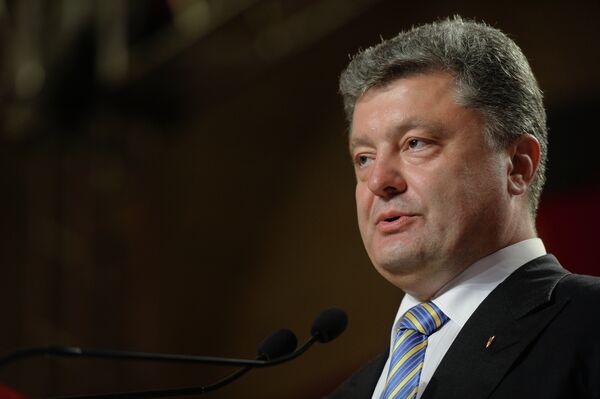 © RIA Novosti . Mikhail Voskresenskiy
/
Go to the photo bank
Subscribe
Ukraine’s new President Petro Poroshenko has asked his Russian counterpart, Vladimir Putin, to assist Kiev in the release of all journalists and activists detained in the turbulent Luhansk and Donetsk regions, according to Poroshenko’s press office.

KIEV, June 18 (RIA Novosti) – Ukraine’s new President Petro Poroshenko has asked his Russian counterpart, Vladimir Putin, to assist Kiev in the release of all journalists and activists detained in the turbulent Luhansk and Donetsk regions, according to Poroshenko’s press office.

“Russian and Ukrainian presidents discussed an array of urgent measures that are necessary for a lasting ceasefire and its effective monitoring. Ukrainian President Petro Poroshenko called on the Russian president to lend a hand in the release of all seized journalists and activists,” the official statement read.

The announcement came after the two leaders held a phone conversation Wednesday. It didn’t expand on whose release was of concern to the new Ukrainian president.

Earlier in the day, Putin’s spokesperson Dmitry Peskov commented on the phone talk, saying the Russian leader had emphasized the necessity to ensure absolute security of reporters on assignment in Ukraine.

This came in the wake of a deadly mortar attack on a Ukrainian village on the outskirts of Luhansk that killed a Russian TV journalist and a video engineer.

Reporter for the state-run VGTRK television Igor Kornelyuk died from wounds in a local hospital Tuesday. His colleague, video engineer Anton Voloshin was reported missing following the incident. Later the same day the TV channel published a statement confirming his death. Kornelyuk’s body was identified by his cameraman Viktor Denisov.

Authorities in Luhansk blamed the attack on the Ukrainian National Guard. Witnesses later said that all the journalists at the scene were wearing press badges.

Following the killing, Petro Poroshenko expressed his condolences and ordered a thorough investigation of the attack.

Since mid-April, Kiev authorities have been conducting a special military operation in the east of Ukraine to crack down on independence supporters that refuse to recognize the legitimacy of the new government.

Moscow, which describes the ongoing military actions as a punitive operation, has called for an immediate end to the bloodshed, but despite numerous promises to initiate the de-escalation process, Kiev has so far not made any moves to stop the attack.