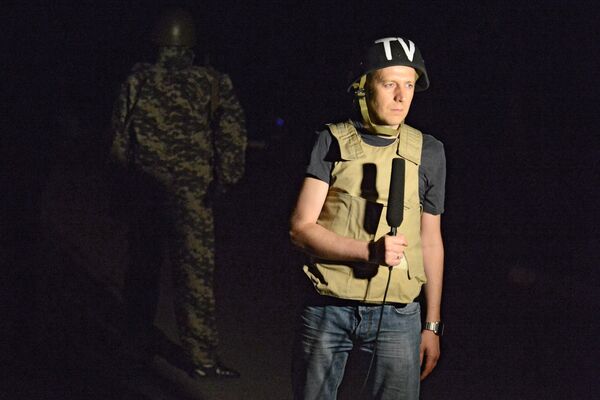 “He died on the operating table," the doctor said.

According to a witness, during the attack a mine exploded near a group of journalists, one of whom was holding a microphone with the logo “Rossiya."

The hospital's Deputy Chief Doctor Sergei Babenko, told journalists the patient had a mine-blast injury. The operation lasted for 35 minutes but brought no result.

The cameraman of the group, Viktor Denisov, was unharmed in the attack. There is no confirmation yet on the status of the third journalist, sound engineer Anton Voloshin, with whom his colleagues lost touch during the attack.

A total of seven injured were delivered to the hospital after the attack in the town of Metallist near Luhansk.

Over the past two months, reporters of Russia’s leading channels have been kidnapped, beaten and threatened while working in Ukraine. Some have been denied access to the country.

Several Russian journalists came under sniper attack near the village of Vostochny, in the suburbs of Ukraine's eastern city of Slaviansk on Monday. Reporters from the Ruptly news agency, Channel One and Rossiya-24 TV have reportedly been attacked over the past two weeks in the area where Kiev is continuing the military operation it started in mid-April to quell the protests of those who refused to support the new government.

Two Zvezda channel journalists were detained in Dnipropetrovsk last weekend, and released Monday in the second case of reporters from the channel being detained in the past two months.

Moscow has repeatedly stated that unlawful de-facto arrests of journalists by the Ukrainian authorities must stop.