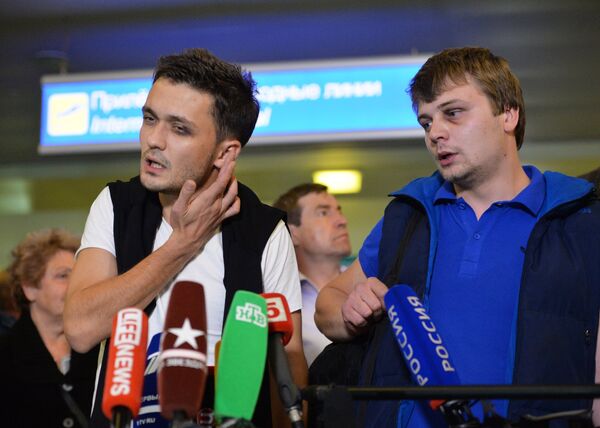 "It would seem it would be hard to go any lower, but acting in the best traditions of gangsters and militants, representatives of the National Guard and Right Sector resorted to trivial blackmailing for $200,000 in return for the journalists' freedom," Markin said.

"The investigators have proof of these facts, and they have been included into the case documents. Imagine the real financial position of the National Guard and such, who attempt to fill their deadly budget by blackmailing Russian citizens for money," the spokesman said.

Markin added the journalists’ case would shortly be added to an ongoing case about the use of forbidden instruments and methods of war by Ukrainian military forces, the National Guard and Right Sector militants, "as the investigators have reason to think that the same people are behind all these crimes.

On June 14, Russia’s Zvezda (Star) channel reported the second detention of its journalists in Ukraine in the past two months – reporter Evgeny Davydov and sound engineer Nikita Konashenkov were captured in Dnepropetrovsk and held in the Justice Ministry building.

The two journalists were released and arrived in Moscow on the night of Monday, June 16. Both journalists were visibly bruised, and were ushered to an ambulance to be taken to a hospital for screening.

Prior to the journalists' return, the head of the media holding that includes Zvezda said the journalists were beaten while in custody and Davydov was even “diagnosed with partial hearing loss." The reporter also said the kidnappers demanded a $200,000 ransom.