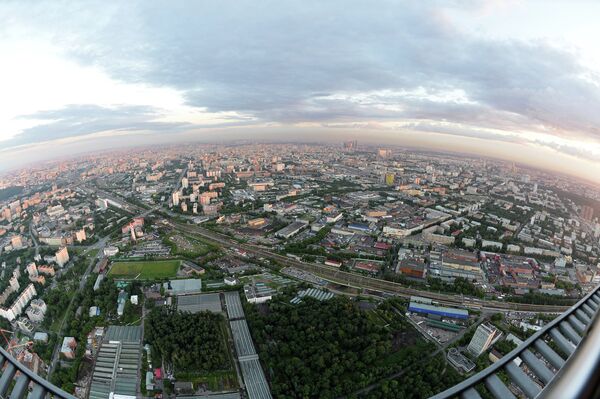 © RIA Novosti . Владимир Песня
/
Go to the photo bank
Subscribe
Almost 2,000 envoys from 182 countries took part in the two-week UN Climate Change Conference in Bonn, Germany, held from 4 to 15 June. The negotiators exchanged their views on a range of issues, including details of the new climate agreement due to be signed in Paris in 2015.

Almost 2,000 envoys from 182 countries took part in the two-week UN Climate Change Conference in Bonn, Germany, held from 4 to 15 June. The negotiators exchanged their views on a range of issues, including details of the new climate agreement due to be signed in Paris in 2015. In an exclusive interview with Radio VR Alexey Kokorin, the head of WWF Russia's climate and energy program, has describe the negotiations' progress as "very slow" but noted that "spirit became more optimistic."

Summing up the results of the talks, the expert hailed the "main new feature of Bonn" – the "start of serious discussion on adaptation." Kokorin sees increasing adaptation as one of the instruments to reduce "the gap between the required temperature limit of 2 Celsius degrees and projected emissions" which currently is very large. The other available solution is to decrease emissions. The latter has already been discussed as one of two components of the new deal in Paris in 2015 – mitigation, or emission reduction, and financial support for developing countries.

The head of WWF Russia's climate and energy program is convinced that the "unified agreement for all largest emitters" expected to be signed in the French capital next year is the best solution to curbing emissions.

The main source of emissions is global energy. 75% of the total comes from "combustion of gas, coal or heavy oil for power, for electricity and heat. Another component is transport and deforestation in some tropical countries," the expert explains.

Both developed and developing countries contribute to climate change. Developed countries are responsible for a bit more than 1/3 of total emissions. All the rest falls on the developing countries. Moreover, they account for all the growth of emissions, point out Mr. Kokorin. Consequently, both groups have to step up efforts to address climate change. Developed states should provide financial support, while the developing nations must try to really reduce and limit emissions.

The expert also states that "it's impossible to force a country to make contributions" but nations themselves must contribute as much as possible and sometimes their contributions "are quite serious." The so called intended nationally determined contributions are one of the results of the Bonn conference, for there is no way to find one solution that could fit all the countries.

According to the unofficial Chinese estimates voiced at the Bonn conference, emissions in China, which is the largest emitter will peak only by 2030 and are not expected to decrease before that. "On the one hand, it's too late; on the other hand, it's an honest assessment of situation," says Mr. Kokorin.

Although the United States is the second largest emitter it is demonstrating positive trends. For instance, the country has recently unveiled sweeping new limits on carbon emissions. The Environmental Protection Agency (EPA) has made public proposals for drastic cuts in carbon emissions from power plants, which account for 40 percent of greenhouse gas emissions in the United States, which is "really a good step," according to the expert.

Moreover, Mr. Kokorin points out that the US has a downward trend. "They have emission reduction, while in China they have emission growth." The expert concludes by saying that, therefore, more attention and support must be pointed at encouraging China and India to decrease emissions, not the US.

In terms of Russia, Mr. Kokorin admits that the country, that is currently the fourth largest emitter in the world, has passed or almost passed the peak of emissions and is on the plateau. He underscores that "Russian emissions are several times less than that of China." He expects emissions to start decreasing in the foreseeable future.

Russia is currently developing emission target to 2030 which is necessary for the new global agreement. "Ecological organizations, including the WWF, are insisting that the target of 2030 must be significantly lower than 2020. It will be great contribution of Russia in global efforts," the expert believes.

A fine example of efforts aimed at protecting the environment in the UN REDD Program that sets to to "radically reduce deforestation and forest degradation in the developing countries, first of all, Brazil, Malaysia, Indonesia, India and some other forest nations," Mr. Kokorin says. This successful program aimed at achieving positive social and ecological outcomes is financed by countries like Norway, the Netherlands, and the US. The expert points out that "social component is essential for both – the donors and implementers."

The next session of talks will take place in Bonn in October. It will be held shortly after a climate summit in New York called by UN Secretary General Ban Ki-moon. The United Nations Climate Change Conference will be held in Paris, France, in December 2015. It is expected that a universal, legally binding and universal agreement on climate could be signed there.