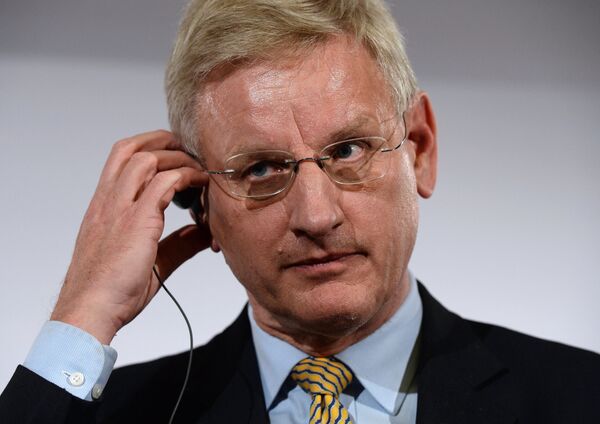 © RIA Novosti . Maksim Blinov
/
Go to the photo bank
Subscribe
The Swedish Government “will not speculate” on whether it will work positively with an independent Scotland, a spokesman for the Swedish Foreign Minister Carl Bildt has told RIA Novosti.

EDINBURGH, June 5 (RIA Novosti), Mark Hirst – The Swedish Government “will not speculate” on whether it will work positively with an independent Scotland, a spokesman for the Swedish Foreign Minister Carl Bildt has told RIA Novosti.

Erik Zsiga refused to confirm whether the Swedish Government had discussed the issue of Scottish independence with UK Ministers at a Bilderberg meeting held in Copenhagen earlier this week, but told RIA Novosti, “The UK is a close ally and we are concerned with this issue [Scottish independence] and the statements made [by Bildt] illustrates that we regard the UK as a close ally and we are concerned about the consequences this will have.”

Earlier this week Bildt told the Financial Times newspaper in London that Scottish independence would have “unforeseen chain reactions” across Europe.

Zsiga added that the Swedish Government had no plans to raise the matter formally again.

When asked if Sweden would recognise the democratic outcome of the Scottish independence referendum, to be held 18 September, and whether his country would work positively with an independent Scotland, Zsiga said, “That would be speculation. It is too early to raise that kind of question."

“I think it is very disappointing that a country that is the home of the Nobel Prize which recognises the notion of rational thought and calm analysis of life has jumped to such emotive and peculiar conclusions,” Riddoch told RIA Novosti.

“That probably leads people to think that this [the Swedish position on Scottish independence] is an extended form of sour grapes,” Riddoch said.

Riddoch told RIA Novosti that none of the Swedish people she has met talked about Scottish independence in the same negative terms as their Foreign Minister.

“It really reflects very unfairly on Sweden’s normally fairly rational and supportive democratic stance on most things across the world,” Riddoch added. “I don’t think anyone in Scotland will look at Bildt’s comments and think it is a serious input into the debate.”

“It reflects very badly on Sweden, which hitherto has had such a good reputation for being the honest brokers and the calm people,” Riddoch told RIA Novosti.