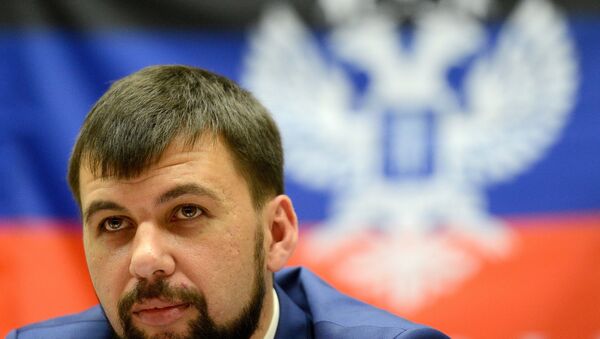 © Sputnik / Evgeny Biyatov
/
Go to the photo bank
Subscribe
Ukraine’s President-elect Petro Poroshenko plans to “do the dirtiest work” in the eastern parts of the country before his inauguration, Denis Pushilin, one of the leaders of the self-proclaimed People's Republic of Donetsk, told the BBC Wednesday.

MOSCOW, June 5 (RIA Novosti) – Ukraine’s President-elect Petro Poroshenko plans to “do the dirtiest work” in the eastern parts of the country before his inauguration, Denis Pushilin, one of the leaders of the self-proclaimed People's Republic of Donetsk, told the BBC Wednesday.

"The presidential election took place, Poroshenko came to power but in overall the situation hasn’t changed [sic]. In recent days the situation has even escalated. On the one hand, there is no one to answer for it. I mean Poroshenko hasn’t taken office yet. We think that the operations being underway now are his orders. In fact, he wants to do the ‘dirtiest’ work before the inauguration in order to partially ‘white-wash’ himself,” Pushilin said.

The leadership of the People’s Republic of Donetsk is ready for dialogue with the new President of Ukraine, but only through a mediator.

“The dialogue is possible if there is a mediator and we see the Russian Federation as such mediator. Two issues could be discussed: firstly, exchange of hostages, and secondly, withdrawal of all military forces from our territory," Pushilin said.

The issue of Ukraine’s federalization is not open for discussion, the independence supporter said, adding “the point of no return is already passed.”

“If there hadn’t been this aggression from Kiev, these victims, only then a question about the federalization could have been put on a referendum. De-facto Ukraine as a state doesn’t exist anymore,” the republic’s leader said.

There is a full-scale civil war going on in Ukraine, he said, adding that Kiev forces’ actions have resulted in significant repercussions for the civilian population.

In mid-April, Kiev authorities started a special military operation in the east of Ukraine to suppress pro-independence protests, with most clashes breaking out in the Donetsk and Luhansk regions. The self-proclaimed people’s republics of Luhansk and Donetsk held referendums on self-determination on May 11, with over 90 percent of voters supporting greater autonomy.

Petro Poroshenko, who won a snap presidential election on May 25, urged law enforcement agencies to complete the “sweeping” of Donetsk and Luhansk regions before his inauguration on June 7.

Moscow has repeatedly urged Kiev to stop this punitive operation, which has already led to scores of casualties.