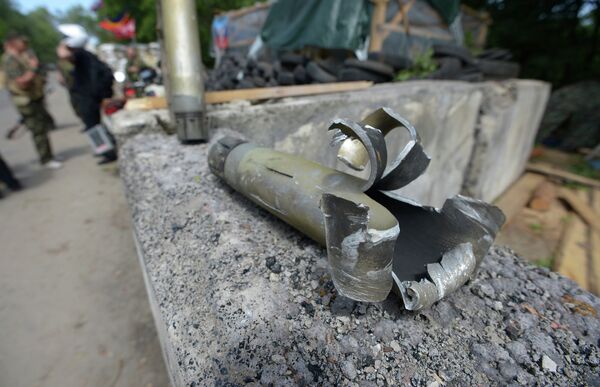 “The punitive operation led by Ukrainian forces reflects signs of an international human rights violation, in particular, of the Geneva convention of 1949,” Kelin said.

“We drew attention to the tragic outcome of an operation in the Donbas [in eastern Ukraine], a barbaric shelling of a building of the Luhansk local administration,” he added.

He referred to reports claiming the Ukrainian military had used exploding bullets, cluster bombs and artillery.

“There are reports on the use of inhumane weapons - exploding bullets, cluster bombs – and the shelling of civilian targets in Ukraine. If they are confirmed, such acts have to be treated as war crimes. If it is proven that Right Sector killed the wounded in a Krasnyi Lyman hospital, there are no words to justify such an action," Kelin said.

The envoy added that the latest report from the OSCE’s Special Monitoring Mission to Ukraine confirmed pro-Kiev forces had been using tanks, artillery and aircraft in its special operations.

"We asked a lot of questions, but Ukraine’s permanent representative [to the OSCE] gave no answers, aside from the usual attempts to shift responsibility to Russia," Kelin added.

The town of Krasnyi Lyman, located to the southeast of Slaviansk in Donetsk Region, was heavily shelled by the Ukrainian army during Kiev’s military operation Tuesday. Ukrainian armed forces allegedly killed more than 25 wounded people in a local hospital, as the National Guard seized the town from the local defense forces following the shelling.

In mid-April, Ukraine’s interim government launched a special operation to crack down on the independence movements, but failed to gain control over the self-proclaimed independent republics in the eastern part of country. The operation has led to violent clashes and dozens of casualties in Slaviansk, Kramatorsk and Mariupol. Moscow has described the operation as a punitive act and urged Kiev to end the violence.