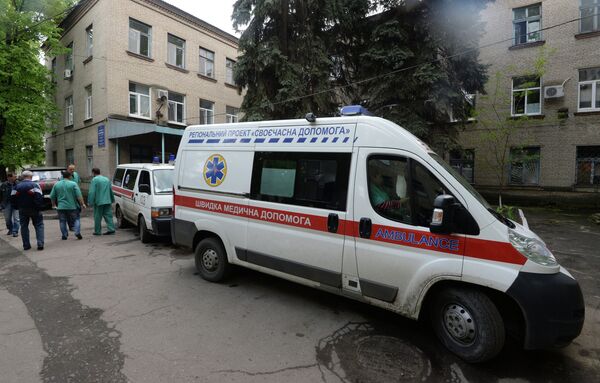 © RIA Novosti . Mikhail Voskresenskiy
/
Go to the photo bank
Subscribe
At least 25 people were killed in Tuesday's shelling of a hospital in the town of Krasnyi Lyman in Ukraine’s eastern Donetsk region, representatives of the self-proclaimed Donetsk People’s Republic (DPR) said Wednesday.

MOSCOW, June 4 (RIA Novosti) – At least 25 people were killed in Tuesday's shelling of a hospital in the town of Krasnyi Lyman in Ukraine’s eastern Donetsk region, representatives of the self-proclaimed Donetsk People’s Republic (DPR) said Wednesday.

“Chairman of the Supreme Council of the DPR, Denis Pushilin said over 25 people were killed by Ukrainian law-enforcement officers in the Krasnyi Lyman hospital,” the republic said on its official Twitter page.

City council officials in Krasnyi Lyman told RIA Novosti early on Wednesday that a hospital in the town was hit by mortar rounds on Tuesday night.

Intense fighting broke out Tuesday in the Ukraine's eastern Donetsk region as pro-Kiev forces stormed the cities of Slaviansk and Krasnyi Lyman.

At least ten civilians and eight self-defense troops died in the fighting near Krasnyi Lyman, according to independence supporters. Several buildings were damaged, including residential houses.

The Luhansk and Donetsk People’s Republics declared themselves independent states following the referendums in May and soon started to form governments and law enforcement agencies. The interim Kiev government refused to recognize the legitimacy of any of these decisions and continued the military operation launched mid-April against the independence supporters in the regions. Moscow has repeatedly condemned the new Kiev authorities for what it called "a punitive operation" and stressed the need for de-escalation of the Ukrainian crisis.

On June 3, Russia circulated a draft UN Security Council resolution urging to stop violence in the east of Ukraine and set up humanitarian corridors to allow the civilians to leave the territory of the military operation.