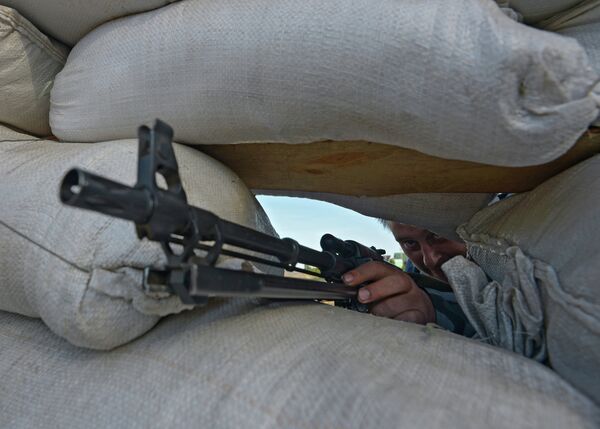 © RIA Novosti . Evgeny Biyatov
/
Go to the photo bank
Subscribe
Women are now manning barricades in Ukraine’s southeast in an attempt to protect their homes from the government’s armed forces fighting to wrest control of the region, according to al-Jazeera.

MOSCOW, June 4 (RIA Novosti) - Women are now manning barricades in Ukraine’s southeast in an attempt to protect their homes from the government’s armed forces fighting to wrest control of the region, according to al-Jazeera.

Yelena Dustova, a 39-year-old operator at a coalmine near the town of Krasny Luch, said her Women’s Battalion was formed from local residents who wanted to defend their families against the mounting onslaught of Ukraine heavily-armed troops.

“Should I allow them to shoot at me in my town? No. I will stand here so that they won't be allowed to pass. I have my mom and my kids in there,” the Qatar-based news agency quoted Dustova as saying.

The mother-of-three told reporters she had stepped up to the barricades at the very start of Kiev’s “anti-terrorist” operation in her native region of Luhansk, in easternmost Ukraine.

“We didn't have anything. No guns, no clubs, no uniforms even. Nothing. We stood shoulder to shoulder, hand in hand – six women,” she said.

The Women’s Battalion is now composed of 25 female recruits. They wear camouflage and are armed with Kalashnikov rifles, but don’t have any masks on.

“If we had peace and calm, then I would never have taken this weapon in my hands,” Dustova explained.

According to al-Jazeera, Ukrainian army helicopters have been targeting checkpoints around the town for missile attacks after the government’s troops launched air strikes at the headquarters of self-defense forces in the heart of the region’s capital city Luhansk.

Starting in mid-April, Kiev's interim authorities have been carrying out a special operation in eastern Ukraine to suppress the protest movement that emerged as a reaction to the regime change in late February.

On Tuesday, authorities of the self-proclaimed Luhansk People’s Republic called for a peacekeeping contingent and a no-fly zone in the region after Ukrainian attack helicopters carried out two airstrikes against the capital on Monday.

The Russian Foreign Ministry said that the airstrike on Luhansk proved Kiev authorities' unwillingness to search for ways to achieve national reconciliation in Ukraine and their disregard of the Geneva accords and OSCE roadmap.