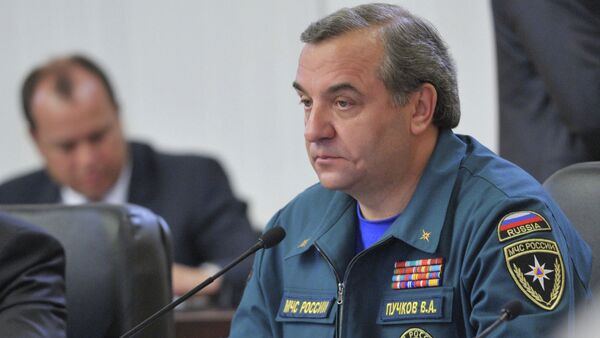 © Sputnik / Alexei Nikolsky
/
Go to the photo bank
Subscribe
Russia's Emergency Ministry is ready to assist Ukraine with humanitarian aid but has not had a request from the Ukrainian authorities, Russian Emergency Minister Vladimir Puchkov said Tuesday.

MOSCOW, June 3 (RIA Novosti) — Russia's Emergency Ministry is ready to assist Ukraine with humanitarian aid but has not had a request from the Ukrainian authorities, Russian Emergency Minister Vladimir Puchkov said Tuesday.

"We have sent the necessary proposition to our Ukrainian colleagues - to create a bridge, to send humanitarian help. But there has been no request on behalf of the Ukrainian authorities," Puchkov told a press-conference.

The ministry plans to send the third humanitarian aid offer to Kiev on Tuesday. The previous two were sent a month ago and a week ago with the Ukrainian side requested to take all the necessary measures for the safe transportation of the Russian humanitarian cargo.

On Friday, Russia's Foreign Ministry said in a statement Moscow was surprised by Kiev’s rejection of proposed Russian aid to violence-hit eastern Ukraine and hopes that the interim government will reconsider its decision.

The ministry notified Ukraine last week it was ready to provide urgent humanitarian assistance to eastern regions, where the clashes between nationalist and self-defense forces have been the sharpest, leading to hundreds of deaths, including among civilians. Earlier on Tuesday, an air strike on Luhansk killed eight people, five people died in a fight at a roadblock by the city.

In response to growing tensions in Ukraine’s eastern regions, the interim Ukrainian government announced the beginning of a special operation to crack down on the protesters in mid-April. President-elect Petro Poroshenko ordered the military to clear out the Donetsk and Luhansk territories, which proclaimed independence from Ukraine last month, until his inauguration on June 7.