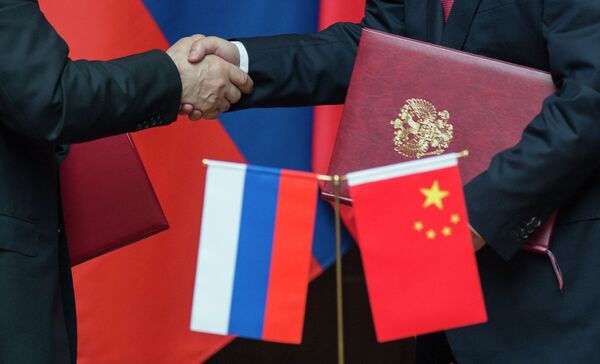 The Russian minister stressed the plan was to make the agency apolitical. The decision came after the US-based Standard and Poor's downgraded Russia’s credit rating from BBB to BBB- in April, following Crimea’s accession to Russia.

Moscow dismissed this move, with Finance Minister Alexei Ulyukayev saying it was “a politically motivated decision."

Only the “big three” of US ratings agencies - Standard & Poor’s, Moody’s and Fitch - are currently looked up to by the majority of international investors as go-to investment consultants, although more out of habit than commonsense, French financial expert Norbert Gaillard earlier told RIA Novosti.

The Russian-Chinese ratings agency will begin its work by evaluating common investment projects of the two neighbor nations.

This new batch of financial cooperation accords is the latest in a string of agreements that were first concluded by Presidents Vladimir Putin and Xi Jinping during their Shanghai meeting in May.

The presidents oversaw the signing of a 30-year contract between Gazprom and CNPC for the sale of Russian gas to China at a volume of 38 billion cubic meters per year with delivery via an eastern pipeline, which will cross Siberia to reach China’s populous northeast regions. The deal is estimated to be worth $400 billion. The first gas deliveries to China from Russia are expected to begin in the next four to six years, with a $25 billion advance for deliveries a possible option.

In a separate agreement, Russia's oil major Rosneft and CNPC agreed to launch an oil refinery in Tianjin in late 2019, and Russia’s largest independent gas producer Novatek has signed a contract with China’s CNPC to supply 3 million tons of LNG per year for 20 years in the framework of the Yamal project.

Other contracts include a deal between Russian Railways (RZD) and China Railway Corporation to cooperate on construction of rail infrastructure at border crossings and the routes leading up to them to increase the capacity of railways, while Russia’s United Aircraft Corporation and the Chinese COMAC Corporation signed a memorandum on cooperation in the prospective program for a widebody long-haul passenger aircraft.

At the same time, the largest Chinese car manufacturer Great Wall Motors announced that it will launch a plant in Tula region in 2017. The investment in the project will amount to 12 billion to 18 billion rubles. The production capacity is currently assessed at 150 thousand cars.