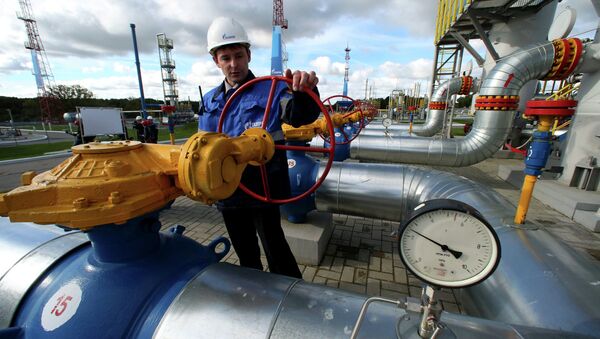 “[a total] of 9.839 of Russian gas deliveries remain unpaid as of today… Ukraine received in May 3.529 billion cubic meters of gas, which is considered as a record for this period of the year,” Kuprianov said.

Gas talks between Gazprom and Naftogaz could continue on Tuesday, the spokesman for Russia’s gas giant added.

“The talks will continue soon, and probably Tuesday… there is a progress in the process of negotiations… all the proposals elaborated by the Ukrainian side was analyzed. There is a perception on how to move further,” Kuprianov said.

On Monday Gazprom CEO Alexei Miller said that the company had postponed the introduction of advance payment scheme for Ukraine until June 9 to give Kiev an opportunity to pay for the May gas deliveries. The switch to the prepayment scheme will depend on whether Naftogaz pay the debt for gas delivered before April 1, totaling 2.237 billion, in full.

Kiev on Friday paid Gazprom $786.4 billion. Ukrainian Energy Minister Yuriy Prodan said that this sum is the only undisputed part of the Kiev’s gas debt. It’s a payment for gas supplied to Ukraine at the price of $268.5 per thousand cubic meters from January to March 2014, he explained.

The gas price for Ukraine surged from $268.5 to $485.50 per 1,000 cubic meters in April after Russia annulled two discounts granted previously to the country. Kiev keeps rejecting the new price saying it was ready to clear its debt if Moscow agreed to sell gas at the old price.

Russia said it would only consider lowering the price of gas to Kiev if it begins paying off its gas debts. Naftogaz has to transfer $2.2 billion by May 30 and another $500 million by June 7, which will cover unpaid gas bills from November to April.

According to EU Energy Commissioner Günther Oettinger, Ukraine’s gas debt to Russia had reached $4 billion upgrading the previous figure of $3.5.

The Gazpom CEO announced that Ukraine would owe Russia about $5.2 billion for natural gas as of June 7 if it makes no payments by that date.