FACTBOX: Transition of Power in Abkhazia 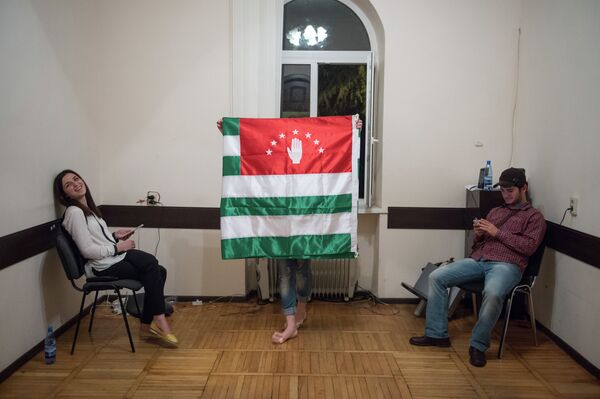 Abkhazia has scheduled early presidential election on August, 24, following mass protests that have led the country’s president Alexander Ankvab to step down on Sunday.

Abkhazian opposition has delivered an ultimatum to the President in April, demanding him to disband the government and start carrying out deep reforms, which was ignored by Mr. Ankvab.

On May, 27, an estimated thousands-strong opposition rally with the same formula was held in the center of Abkhazia’s capital Sukhum. The protesters then took over the Presidential Executive Office, Government headquarters and the main television broadcasting buildings.

Alexander Ankvab, who has by the time left Sukhum for his hometown of Gudauta, has condemned opposition’s actions as an “armed coup attempt”.

Later on May, 29, Abkhazia’s parliament passed a non-confidence vote to the country’s Prime Minister, Leonid Lakerbaia. It has also repeated the opposition’s calls for Ankvab to resign.

In two days, the parliament’s spokesperson Valery Bganba was elected as an interim president.

On Sunday, Alexander Ankvab has declared his resignation, “I call everyone for staying calm, carrying out a new election in normal atmosphere,” said Ankvab.

The former president has said that his primary goal as a president was to prevent bloodshed. He added that certain forces, fighting for the power in Abkhazia “Will go any length and are ready to sacrifice their compatriots’ lives to their own ambitions”. Ankvab did not clarify which forces he meant.

Responding to the crisis, Russia has sent two senior officials, President’s aide for Abkhazia and South Ossetia Vyacheslav Surkov and deputy Security Council’s secretary Rashid Nurgaliev, to Sukhum in order to facilitate talks between the sides.

“The crisis has been resolved peacefully due to Alexander Ankvab’s noble decision,” Surkov commented on the issue. He also pledged Russian Federation will provide more financial and military support for Abkhazia.

The opposition leader Raul Khadzhimba is the leader of “The forum of People’s unity of Abkhazia” party. He is considered to be a moderate nationalist. Khadzhimba has opposed the ex-president’s policy of naturalization of the Georgians residents of Abkhazia. He is also an opponent of affiliation with Russia, however, not questioning Moscow’s military and economic help. Khadzhimba has said he supported security guarantees for the resigned President.

Abkhazia was an autonomous part of the Georgian Socialist Soviet Republic. When Georgia declared independence from the USSR in 1991, pro-independence sentiment has grown among Abkhazians. This has triggered Georgia’s decision to send troops in the region in 1992 in order to stop Abkhazia from breaking away. Following an intense fighting, Georgian forces have been pulled out of Abkhazia’s territory.

In 1994, the sides agreed on ceasefire, with the UN peacekeepers stationed in the buffer zone between Georgia and Abkhazia. In 2009, the latter has proclaimed independence.

Following the peace enforcement operation against Georgia’s aggression towards the breakaway republic of South Ossetia in 2008, Russia has stationed troops and S-300 anti-aircraft missiles in Abkhazia. Moscow has also officially recognized Abkhazian and South Ossetian independence, alongside with Venezuela and Nicaragua.

The country remains in heavy dependence on Russia both economically and politically. Abkhazia uses Russian rouble as a national currency. Russia has invested around $300 million in Abkhazian economy in 2009-2013, and plans to invest another $85 million this year.