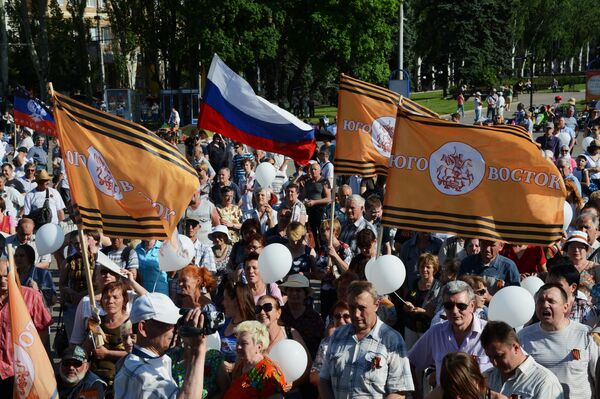 © RIA Novosti . Natalia Seliverstova
/
Go to the photo bank
Subscribe
Liberal Democratic Party of Russia (LDPR) believes that Kiev is "illegally occupying" eight regions of the Southeast of Ukraine, and prepares a draft law on the status of these territories.

MOSCOW, May 30 (RIA Novosti) – Liberal Democratic Party of Russia (LDPR) believes that Kiev is "illegally occupying" eight regions of the Southeast of Ukraine, and prepares a draft law on the status of these territories.

"Due to the unstable situation around the Southeastern part of Ukraine, the LDPR faction intends to submit a draft law on occupied territories of Russia in the nearest future," the press service of the party reported.

"The Kiev government is illegally occupying all eight regions of the Southeast of Ukraine," the press service stated, noting that the party hopes that these regions would be able to follow Crimea’s example and join Russia.

The Liberal Democratic Party believes that all the territories that once belonged to Russia or the Soviet Union should once again have the Russian flag fly over them, especially in those regions “where Russians have always lived, where they tamed all the lands, where they built cities, and first of all, these are the eight regions that want to be Novorossiya and that do not want to have anything in common with Ukraine anymore."

"Let us hope that if the law is passed, it will provide speedy de-occupation of the Southeastern regions of Ukraine that will be able to exist as a new state," the statement said.

Previously, Donetsk People’s Republic Governor Pavel Gubarev said May 18 that there is a strong chance for the unification of the Donetsk and Luhansk regions, which he believes will be the basis of a new state: Novorossiya.

Following Crimea’s reunification with Russia in mid-March, the self-proclaimed Donetsk and Luhansk people’s republics in eastern Ukraine held referendums on self-determination on May 11, with over 90 percent of voters supporting greater autonomy.

The interim Kiev government, backed by the Western allies, refused to recognize the legitimacy of any of these decisions and launched in April a military operation against the federalization protesters in the Southeastern Ukraine.

Multiple attempts by the international mediators to start the de-escalation process have so far been unsuccessful, with the Kiev government refusing to halt the military actions even after the recent early presidential election in the country.