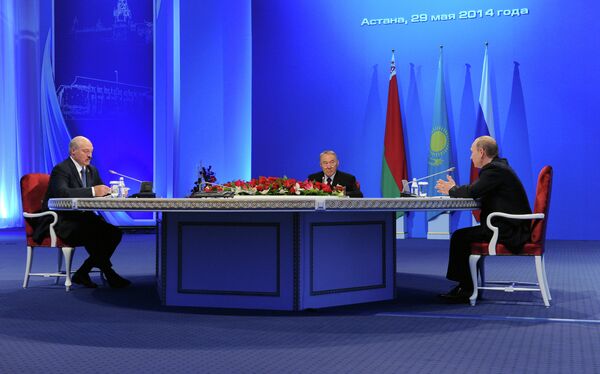 © RIA Novosti . Mikhail Klimentyev
/
Go to the mediabank
Subscribe
International
India
Africa
The Eurasian Economic Union is a better, more realistic step towards economic integration than the European Union, and will be more productive, said Andrew McKillop, a former chief policy analyst at the European Commission Directorate General for Energy.

WASHINGTON, May 30 (RIA Novosti), Lyudmila Chernova — The Eurasian Economic Union is a better, more realistic step towards economic integration than the European Union, and will be more productive, said Andrew McKillop, a former chief policy analyst at the European Commission Directorate General for Energy.

"It is the right decision at the right time," McKillop, now an independent journalist and adviser, told RIA Novosti Friday.

The Eurasian Economic Union (EAU) goes deeper into more substantial and basic economic issues than the European Union's Stabilization and Association Process (SAP), the expert said. SAP targets 28 countries, stretching from Morocco to Mongolia, to form a loose customs union, with “potentials for the SAP countries to become EU members.”

“No date is fixed for their adhesion to the EU,” McKillop said. “Inside the European Union, public opinion and voter intentions are opposed to the SAP process.”

He reminded that in the May 23-25 European elections in all the 28 European Union states, the anti-European parties scored massive electoral gains.

“Mindless expansion of the European Union will have major economic handicaps – and the European voters know this,” the expert said.

In theory only, the SAP process could one day increase to double its membership to 56 states, McKillop said, adding that this was not an economic project, but entirely political.

“President Putin has taken the better step of focusing on neighbor countries and on economic issues,” he said.

He emphasized that inside the partner-countries, no specific social and political or economic reforms have been set as the condition for membership.

“For the EU28 SAP process, conversely, major reforms and changes to society and the economy are demanded as a pre-condition for membership,” McKillop said.

“The Eurasian Economic Union process is stepwise and moves forward only when there are concrete win-win benefits for all parties.”

On Thursday, Russia, Kazakhstan and Belarus signed an agreement establishing the Eurasian Economic Union. The treaty will go into effect on January 1, 2015. The deal stipulates integration and free trade between its three member states, with more countries are expected to join the block.