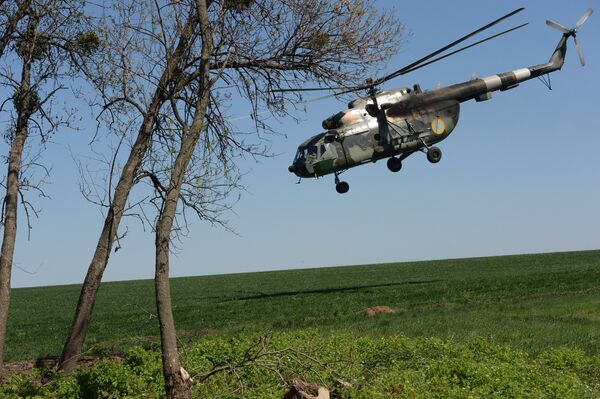 Fourteen Ukrainian servicemen, including a general, were killed when a helicopter was downed Thursday in the eastern Ukrainian city of Slaviansk, acting President Oleksandr Turchynov told the country’s parliament.

KIEV, May 29 (RIA Novosti) – Fourteen Ukrainian servicemen, including a general, were killed when a helicopter was downed Thursday in the eastern Ukrainian city of Slaviansk, acting President Oleksandr Turchynov told the country’s parliament.

“I’ve just received the information that a helicopter transporting our military was shot down. There were 14 Ukrainian troops, including a general. All of them are dead,” the interim leader said.

Earlier in the day, eyewitnesses told RIA Novosti that two military helicopters were shooting at federalist forces and were downed by return fire, presumably using an anti-aircraft machine gun.

“A helicopter had been flying over the houses then the gunfire was heard and it began to smoke and fell down. It’s lying on the ground and burning now. We cannot approach it because there is shooting there,” residents of Chervony Molochar village told RIA Novosti.

The second helicopter fell down near the village of Andriivka.

Fighting continues in the area.

The news coincided with Ukraine’s news agency UNIAN report that the active phase of the military operation in Slaviansk and Kramatorsk has been put on hold.

Pro-federalization protests have swept across Ukraine’s southeastern regions in response to the regime change in Kiev in February and ouster of country’s legitimate president Viktor Yanukovych.

In mid-April, Ukraine’s interim government launched a special operation to crack down on federalists, but failed to gain control over the self-proclaimed independent republics in the eastern part of country. Moscow described the operation as a punitive act.