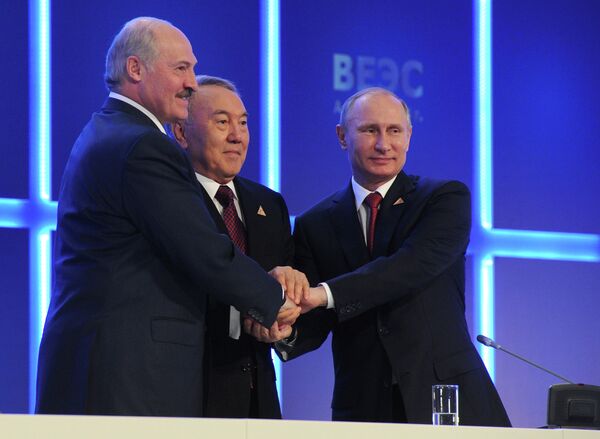 © RIA Novosti . Michael Klimentyev
/
Go to the photo bank
Subscribe
Moscow has signed new oil deals with Minsk and Astana after the three countries merged into the Eurasian Economic Union (EAU) on Thursday.

ASTANA, May 29 (RIA Novosti) – Moscow has signed new oil deals with Minsk and Astana after the three countries merged into the Eurasian Economic Union (EAU) on Thursday.

The new intergovernmental agreement between Russia and Belarus ensures that the latter will get no less than $1.5 billion in oil export taxes and Russia will fully load Belarusian refineries with tax-free oil.

"We have been able to reach a mutual agreement, and we have signed two protocols today. The first is about introducing changes to the distribution of export tax, which reflects the previous agreements between our presidents, and adds that starting in 2015, the Republic of Belarus will retain 1.5 billion in export taxes. Later, starting in 2016, the sides may review the digit toward an increase," Sergei Rumas, a board member of the EAU Commission in Belarus, told journalists.

"We have also introduced changes to the intergovernmental agreement of 2007 on the mutual oil and oil product trade, according to which Belarus will be supplied with oil to the full capacity of its refineries until 2025, when a common oil market will be formed," he added.

Russian President Vladimir Putin and the leaders of Belarus and Kazakhstan signed the treaty on the formation of the Eurasian Union in Astana earlier on Thursday. The treaty will enter into force on January 1, 2015.

The new EU-style bloc aims at promoting integration and free trade between its three member states, with more countries to follow. Putin has urged Armenia to join the union.