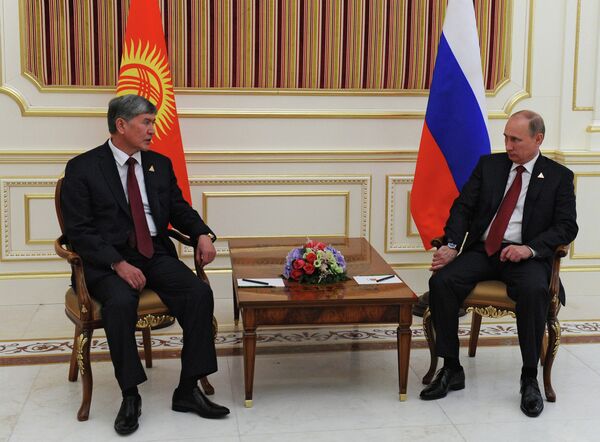 “Anyway we are ready to help, lend our shoulder,” the Russian leader assured his Kyrgyz counterpart, Almazbek Atambayev, on the sidelines of the Supreme Eurasian Economic Council session in the Kazakh capital Astana.

Putin stressed that earlier in the day the sides had already discussed a roadmap on bringing Kyrgyzstan into the union.

“It is pleasant to see your attitude for the implementation of this work given all the difficulties. Both the Eurasian Commission experts and your specialists will have to do some work,” the Russian leader said.

As for Russian-Kyrgyz bilateral relations, “everything is advancing as planned,” according to Putin.

Atambayev in his turn thanked Putin for his support.

“If you had not lent us your shoulder in time of need, things would look much worse for us,” the Kyrgyz president said adding that the decision was made without any doubts “thanks to friendly relations.”

The leaders of Russia, Kazakhstan and Belarus earlier on Thursday inked the Eurasian Economic Union Treaty, that is due to enter force on January 1, 2015. The EAU was conceived as an EU-style bloc aimed at promoting integration and free trade between its three member states. More countries are expected to join the union.