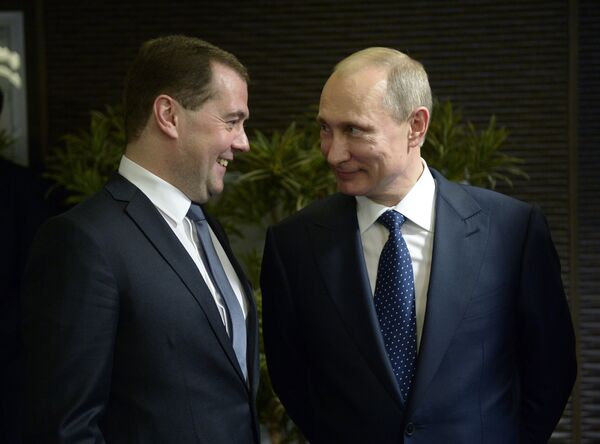 MOSCOW, May 29 (RIA Novosti) – The popularity of Russian President Vladimir Putin and Prime Minister Dmitry Medvedev among Russians continues to grow, according to data released Thursday by the independent pollster Levada-Center.

“Vladimir Putin’s public approval rating continues to grow, reaching its peak in the last four years," an appendix to the survey reads.

Eighty-three percent of respondents said they approved of Putin’s policies as Russian President, while 16 percent said they disapproved and 1 percent abstained from answering. The data indicates the growing popularity of the Russian president, as in April less than 82 percent of Russians approved of Putin’s policies and 72 percent did in March, according to the pollster.

Another question of the survey was about Russia’s policy direction as a whole. More than half of those surveyed – 60 percent – said that the country was moving in the right direction, while only 23 percent had a different opinion.

Levada Center also questioned the names of the most-trusted Russian politicians and, once again, Vladimir Putin held the leading position, as he did last month. The second and third places belong to Russian Defense Minister Sergei Shoygu and Prime Minister Dmitry Medvedev respectively.