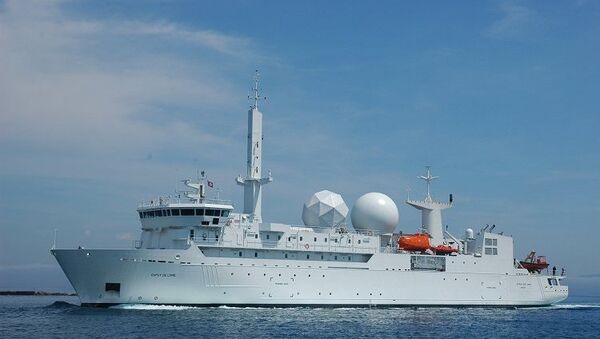 Two other NATO warships deployed to the Black Sea, the French La Fayette-class frigate Surcouf and the US Ticonderoga-class Aegis guided-missile cruiser Vella Gulf, remain in the area.

The 3,600-ton Dupuy de Lôme was spotted in the region in early April.

The ship, intended for strategic intelligence, can intercept mobile phone calls and emails.

Under the Montreux Convention, the warships of non-Black Sea states may stay in the region for no more than 21 days.

Russian experts call the presence of NATO warships in the Black Sea a “play on the nerves.”

The chairman of the All-Russian Movement for Fleet Support, Mikhail Nenashev, told RIA Novosti that the presence of NATO warships in the Black Sea is a continuation of the West’s aggressive pressure on Russia and is likely to trigger a similar response from Russia.

Following Crimea’s reunification with Russia, NATO has been systematically stepping up its presence near the Russian border, citing a need to protect its allies. The alliance has dispatched several warships to the Black Sea. In recent weeks, the USS Truxton, Cook, and Taylor have visited the region.